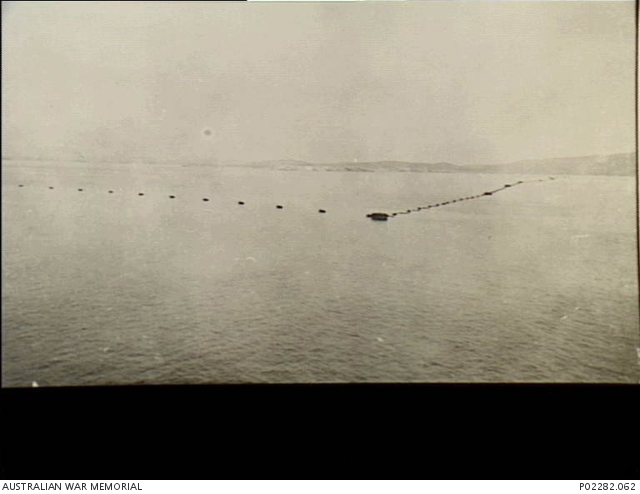 Approaching the submarine boom on the run into Mudros Harbour, 1915.
[Courtesy of Australian War Memorial - H15536]

I was up before 5 o’clock just as the engines stopped and am going on deck after a bath in a tub. I found we were just outside the boom at the entrance of Murdros Harbour. After a little wait we went inside and anchored not far beyond the entrance. In the far distance we could see a large number of Cruisers etc anchored in the Harbour. I noticed the Island shores did not look as beautifully green as on the last occasion I was here. It seemed as if a winters blast had passed over leaving its lingering touch.

We have emergency rations served out and we ordered to be ready to leave for the Dardanelles at 5 o’clock. The hour came but we were still waiting and at last found our departure was postponed till tomorrow. Alas another night on board the “Southland."

A couple of rounds fired by No 2 Gun at party digging gun pit on Gun Ridge. 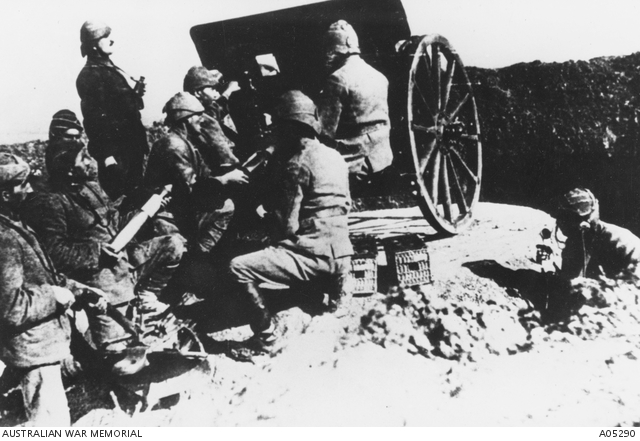 Turkish Artillery in action on Gun Ridge, 1915.
[Courtesy of Australian War Memorial - A05290]

Enemy fairly quiet. Sketch of No 1 Section also sketch of coast handed to Col MacLagan for reproduction. Benson will now probably commence on a similar sketch for No 2 Section and possibly later the New Zealand Section. Got Brigade party together for possible night operations.

Discussed with R.M.L.I. Officer position for new 6" How landed yesterday. Road around No 1 Section completed, that from No 2 Section decided yesterday and work will be commenced at once. Lunched with Major Martyn and Engineer Officers. Olive Grove guns opened fire along beach at 10PM tonight, rather unusual. Major Burgess got on to a party of 250 Infantry this morning, with result a heavy casualty list.