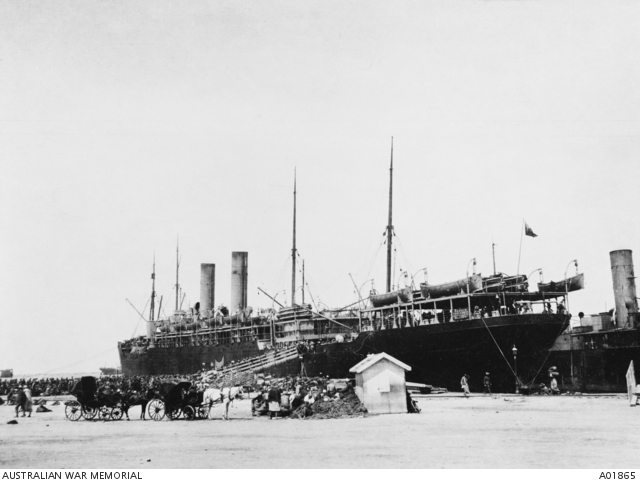 We recd no orders to go but at 2PM we were fallen in again and taken in motor wagon to B [illegible] “Southland". She was a fine ship to look at but our quarters in the 3rd class were not too good. They were very hot and stuffy and I elected to stay on deck in a horse stall.

A cosmopolitan place like Alexandria is full of intrigue etc.

The Southland was really named “Vaderland" a Belgium ship and had good quarters in the 1st & 2nd class. I had a good opportunity to survey the Eastern Harbour of Alexandria which was full of craft. It was a very warm day as we left. I spent to day [illegible] expecting to find we would be out at sea by morning.

A Battery of about 4 guns opened on us from Gun Ridge firing from just below the crest.  No 2 Gun opened on them + they engaged No 2 Gun which fired 46 rounds 16 of which were percussion.  No damage was done by the enemy’s guns which ceased fire about 9am.

While No 2 Gun was engaged as above the enemy gun on contour 400 again opened but our No 4 gun silenced it in 4 rounds.  Turks were observed constructing trenches Sq 3 TREES S.E. of Kaba Tepe.  Destroyer shelled these trenches + was fired on by a gun on Western Crest of hill 600 but without effect.  This gun is out of our range.

A lively cannonade heralded daylight. Just before 5am the enemy’s guns Loosed off and we expended about 80 rounds before he was quietened. New guns opened up from the centre depression of Gaba Tepe. One of Browne’s 8th Battery men wounded today by shrapnel. Visited D.A. Headquarters this afternoon. Had a long interview with Col Hobbs.

Obtained authority to select party of from 20 to 25 men for night sorties in connection with proposed demolition of enemy’s guns. So far he will not consent for me to go, though I think I could be successful. General Owen came in while I was there and we discussed Artillery details generally. Obtained authority for 10 rounds of 6" How. Ammunition to be expended on Gaba Tepe target if they should open fire tomorrow morning. Navy did a fair amount of shelling, enemy very quiet all the evening and night. 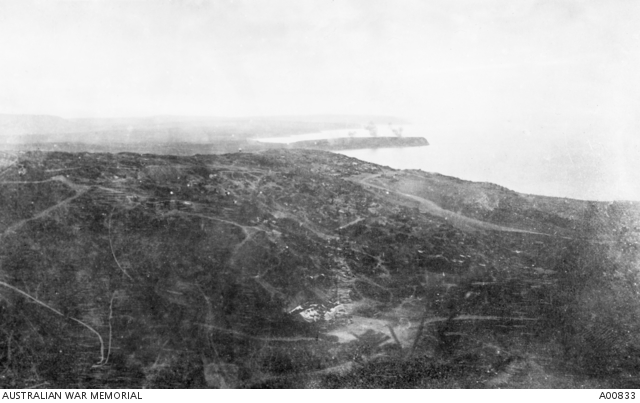 Plumes of smoke rising from Gaba Tepe in the distance, resulting from allied
warship shelling, June 1915.
[Courtesy of Australian War Memorial - A00833]