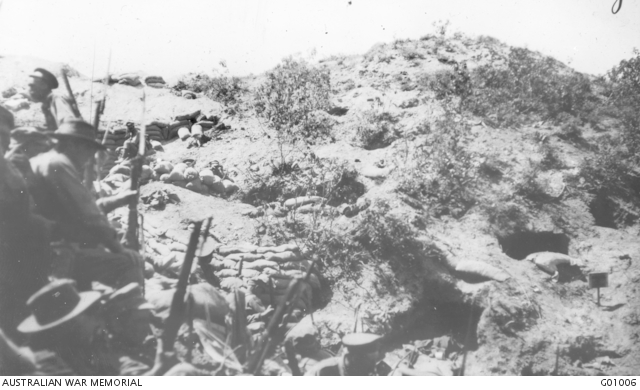 The Turkish attack on Quinn's Post referred to by Major Hughes below, had actually
occurred 2 days earlier on the 29th May - "The Turks exploded a mine beneath Quinn's
Post, and all the Australians in this part of the line were killed or wounded.  The Turks
followed up with an assault but, after savage fighting, the Australians beat back the
attack.  Thirteen Australians were killed and 81 wounded, the Turkish casualties were
estimated to be more than 300" [Beneath Hill 60 - Will Davies]. The photo above show
a view of Quinn's Post during the attack, with Australian supports waiting to counter-
attack at left of frame.
[Courtesy of Australian War Memorial - G01006]

Enemy blew up a trench on our left at QUINN’S POST which they had mined.  They were driven out + some prisoners taken.

Another very quiet day. Information has come in to the effect that the night before last Phillips guns got into the enemy’s reserves, the casualties totalling 2000. Accompanied Colonel Hobbs around the position during morning. Instructed Burgess to select and prepare new emplacement for casemate gun. Had lunch with Major Browne. Was informed Major Mills had died of wounds received at Cape Helles. Made inspection of rear of 1st Section and made sketch of road to run round & facilitate movements of guns and bodies of troops. General approved same. Quiet day and quiet night.