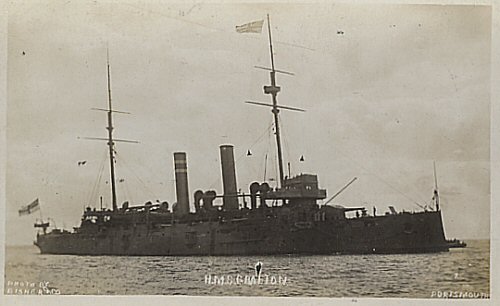 The H.M.S. Grafton, which periodically shelled the Olive Grove before being turned
on an alternate target (below).
[Courtesy of The Weatherings]

To-day the sun shone brightly & the scene was lovely. The snow dazzled & sparkled like diamonds under its feet. Of course by now most of it was hard & frozen into icles. It was lovely to get the heatening of the rays of the sun.

I was busy all the day moving Canteen goods to Units.

1100 Enemy's aeroplane flew over our position.

1400 Enemy's gun firing from direction of SCRUBBY KNOLL obtained several effective bursts on No 3 pit but no damage was done. The Battery did not fire.

1130 H"M"S."GRAFTON" commenced a series at SQ.68-C-5 only 4 rounds were fired when advice was received that she was ordered elsewhere.Observation from F.C.O. was not possible for this targetand arrangements were made for spotting to be carried out from 7th.Battery.  The four shots fired were unobserved.

1315 Battleship steaming south was fired upon by enemy gun from SQ.47-N.  H.M.S."GRAFTON" engaged this target.