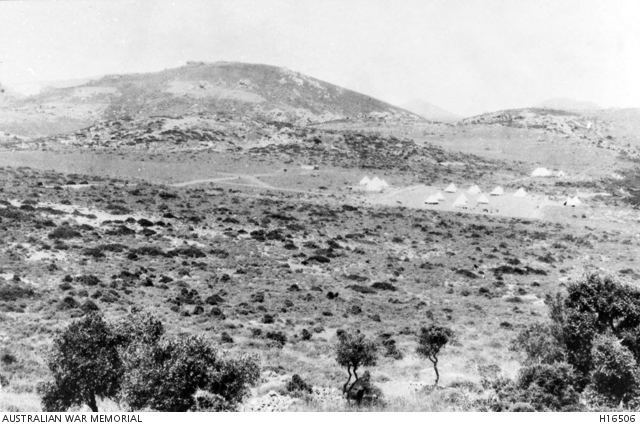 Just nosed about to-day getting a little here and there. There was only one Greek fruit & nut shop to buy from & it was in charge of or owned by a very excitable individual and also very independant. He would close up shop just when it suited him even if there was dozens of customers waiting. The prices were restricted by the military Authorities. I got some nice apples & nuts to bring back. R.Q.M.S. Perry 7th LH was also over to purchase for his unit and he went up to one of the Villages on Thursday but up till to-day he had not returned.

As my work in buying guarding was so much I could not leave Thephelos. I made arrangements to get some capes made to take back next morning from the Greek Bakery. Had a game of Bridge that evening in the tent of some members of the 27th Battalion who were across making purchases for their unit.

1115 Gun to the right of WINE GLASS TREE firing on 7th.Battery.  9th.Battery retaliated.

1156 Gun from direction of OLIVE GROVE firing towards 7th.Battery.

1715 No.1.Gun 8th.Battery fired on enemy's works near CHATHAMS POST.  Ineffective owing to difficulties of observation and failure to clear parapets.