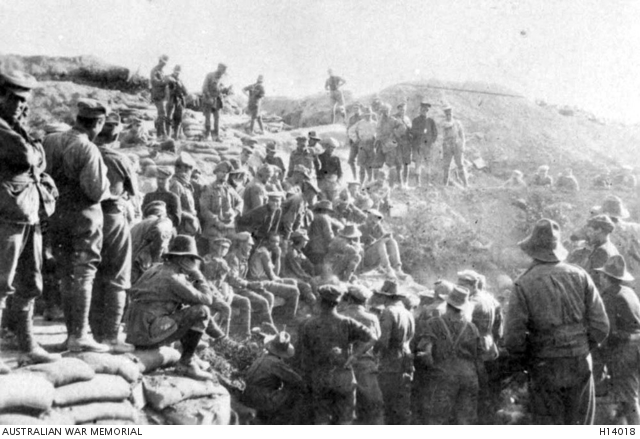 When stores arrived back at Gallipoli from Imbros, they were much sought after by the
men - the above shows troops attending an auction of stores, brought back from Imbros
by the 23rd Battalion, at Brown's Dip.
[Courtesy of Australian War Memorial - H14018]

To-day we fixed prices to allow of a little profit for breakages etc & then called for orders from the Batterys. Needless to say the orders far exceeded the stock I had secured. In the evening I made up the orders working late to have them ready early.

During the evening our Light Horse went out & took a Turkish Trench on the right. Our Artillery did a lot of firing to keep off any reinforcements. There was little or no opposition to the stunt as we call these little affairs. I am sorry to say the Lieut Tibby Brunditt an old Brisbane Boy who was in our 5th Light Horse was killed by a Turk. He shot him when only a few yards away.

1610 An 8.2 gun shelled McCAYS RIDGE from North Easterly direction.  One shell fell in No.4.Gun pit 9th.Battery exploded cartridges of 5 rounds and one man was scorched on arms and face.  Gun was uninjured.