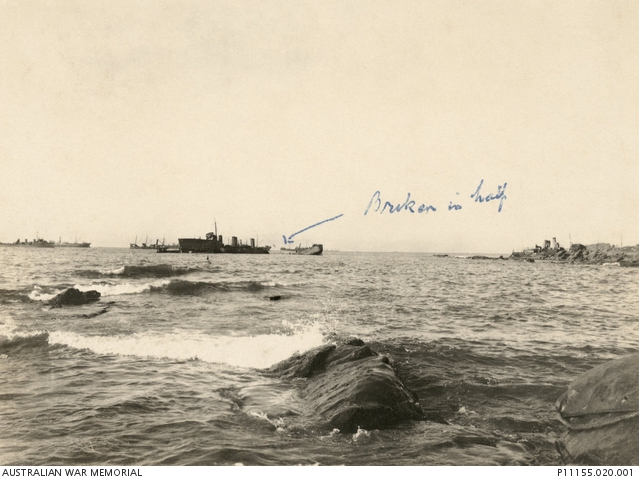 "Destroyers and Transports in Svla Bay.  The wreck of one T.B.D." - original inscription,
relating to the grounded Torpedo Boat Destroyer seen in the photo, "Broken in half."
Will Sparkes witnessed this wreck, & detailed the experience in his diary (below).
[Courtesy of Australian War Memorial - P11155.020.001]

I was up very early – in fact about 4 o’clock. Got capes packed & fixed up other cases etc. Had hard work lifting cases into transport & getting down to wharf by 7 o’clock. I left very off. The Egyptian Arabs hauled the 29 cases I had aboard & we lifted anchor sharp at 7 am. It was nice & cool and made a fine run. We called in at Suvla first. This is where the recent landing took place. There was not much to see except tents horses etc. & plenty of war material. On the rocks ashore was a Torpedo Destroyer broken in halves. She was driven ashore by the rough weather last Sunday we found & was a total wreck. All her guns had been dismantled & she was stripped of everything possible so that it would not be further destroyed by shelling from the Turkish guns.

We heard plenty of the crash & booming of the guns as we neared the shore. On board the Trawler we had a lot of Greeks who had come over from Embros evidently to work at Suvla on contract. At Embros they get the magnificent sum of 2/6 per day while working for the Authorities. Those we carried over were a motley looking crew as far as dress was concerned & which gave some of them a very cut throat appearance. Some in caps vests coats sashes of considerable length which were wound round & round them others had ordinary sacks cut as vests or aprons etc

The Greeks were placed aboard one of the steamers at Suvla & it was amusing to see them bundled off with their belongings by the sailors. They had all their goods in sacks & one poor unfortunate lost his overboard. The poor fellow wildly gesticulated & when put off he sobbed bitterly. One of our men threw him a blanket & he seemed very thankful.

Arrived Walkers Pier off Anzac at 1 PM. There we had to tranship from the Trawler to a small Pinnace. The Trawler could not go in too close to the Pier (Walkers Pier). It was a nuisance changing over & I had really no one to help me. When I got to the Wharf it was just the same. Not a soul to meet me. I telephoned & a small party came down to guard the cases & I handed over cases to 1st & 2nd Brigade’s representatives. A large wagon of the 8th Battery came down to take our cases about 8 oclock & we soon had everything in it & started our journey to Headquarters. It was a very rough trip & I felt tired when we arrived there – having had little to eat since the day previous. I slept at Headquarters making a bunk in the underground store wh had been dug.

One man rejoined the Battery from Hospital.  Two men sent sick to Hospital.  The Battery did not fire.  A new sap was commenced by Battery in rear of No. 3 Gun with view to constructing a funk pit for that detachment.  When completed this funk pit will have a roof of 15 feet solid earth.

0615 Gun from SCRUBBY KNOLL and GUN RIDGE firing towards 7th.Battery.

0647 Gun from LEFT firing over this position.

1341 Party of horses and men on flat behind GUN RIDGE to right of WINE GLASS TREE.