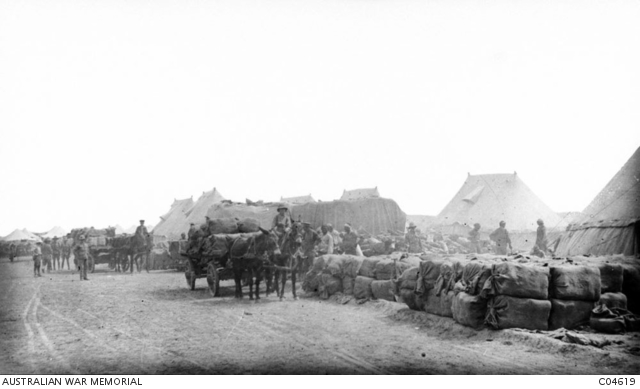 Austraian Army Service Corps wagons loading bales of bread at the 1st Australian Field
Bakery at Imbros, for shipment to Anzac - Will Sparkes likely purchased some of these
bales during his visit (below).
[Courtesy of Australian War Memorial - C04619]

Up very late this morning. I did not like to leave my bed. Had wash & a drink of tea. Saw Capt Stowe and spent most of the day buying & marking my cases. It was well after dinner when I had finished & I then went to the Wash Tent and fortunately secured a little hot water – what a luxury. I then stripped & bathed. How I enjoyed it. I felt several years younger after it. Whether it was the weight of the dirt being off or not I cannot say. Had Cocoa with Smith at Y.M.C.A. Called Owens “Any [illegible]"

Made a tour round & called on Crewe Australian Bakery etc arranged to get vegetables etc & then returned to Blankets. They were very welcome with the wind blowing etc.

Battery did not fire, seven men from reinforcements reported to Battery for duty.

In pursuance of OPERATION ORDER H.M.S."GRAFTON" took up position to engage OLIVE GROVE SQ.56-Q-4 and opened fire at 1000.  Observations of fire were made from F.C.O. until first shot of broadside was reported correct.  The 8th., 9th, and Heavy Batteries then commenced their series, first at SQ.56-Q-4 and subsequently at SQ.56-W-1.  During the bombardment OLIVE GROVE GUNS fired a few rounds in retaliation.  A gun from WINE GLASS and another from direction of SCRUBBY KNOLL fired on RIGHT FLANK.  Throughout the afternoon a gun from OLIVE GROVE has fired many times at irregular intervals towards the BEACH.