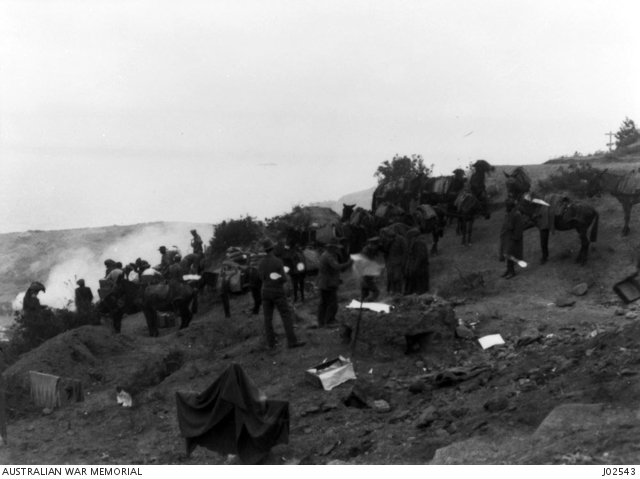 Mule transport at the top of White's Gully, near the 1st Division Headquarters - a similar
mule transport would have been used by Will Sparkes to transport his Canteen stores up
from the beach (below).
[Courtesy of Australian War Memorial - J02543]

Went down to Beach again this morning & saw McLaren Lowlands. On way down arranged for Mules to take cases away from Beach. Waited till they arrived & got wet through again. It was bitterly cold. Had long journey back up ridges to escape view of enemy as we were attempting to mislead the Turks that we were evacuating the positions we held. I found 2 cases were missing after everything was checked over but where they had gone it was hard to say.

1220 Enemy gun from the direction of CEMENT EMPLACEMENT fired towards CHATHAMS POST.

1500 Enemy gun from the Northern section of WINE GLASS BATTERY fired a number of rounds on our RIGHT FLANK.

The day has been fairly quiet.  The OLIVE GROVE guns having fired very little in comparison to the past few days.