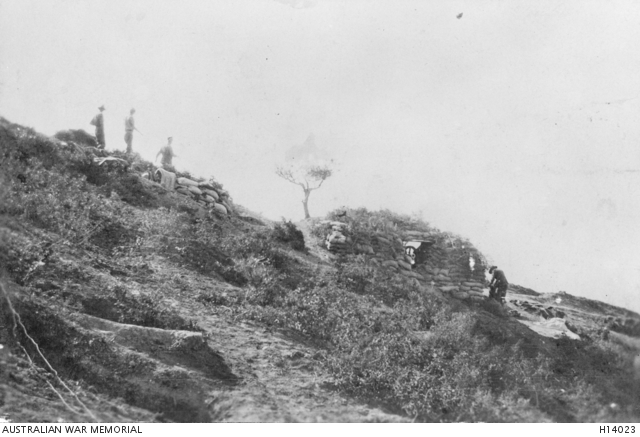 An 18 pounder in Brown's Dip - likely No. 1 Gun of the 6th Battery, which provided
the majority of destructive fire on the 14th November (below).
[Courtesy of Australian War Memorial - H14023]

To-day all our guns opened up with a tremendous bombardment of the Turkish Positions. The place was a babel of noise and the Turkish Artillery commenced to return the fire and added to the Inferno. I went to the Y.M.C.A. Canteen for Headquarters this afternoon. It was a lovely crisp day. Kitchener is reported to have spoken to some of our lads to-day on the beach.

1300 An enemy work near CHATHAM'S POST ON HARRIS RIDGE was fired at and demolished by No.1.Gun 6th.Battery while this gun was firing it was covered by 5th.Lowlad Battery and 8th.Battery firing on enemy Trenches in the same vicinity.  Enemy guns from WINE GLASS RIDGE and direction of SCRUBBY KNOLL retaliated on LONE PINE and fired on 6th.Battery gun.  To assist in drawing the fire off 6th.Battery the 7th.Battery opened fire on vicinity SQ.68-B-6 where Infantry had reported a Trench Mortar and did considerable damage.

1325 Guns also opened on 6th.Battery from SQ.68-V-9 and 68-W-1.  These were engaged by 8th.Battery and caused to cease firing.  The 9th.Battery also fired Three (3) rounds at OLIVE GROVE to prevent him opening on 8th.Battery.

1545 1st.Infantry Brigade reported something they suspected to be a gun on PINE RIDGE at SQ.68-H-3-6.  No gun has fired from this spot which is being kept under observation.

1615 Gun from GUN RIDGE SQ.68-R-4 fired on CHATHAM'S POST.  In retaliation Heavy Battery fired on GABA TEPE with No.2. 6" Howitzer and registered on enemy's Machine Gun position there.

This day at 1pm, No 1 gun of 6th Btty firing from Browne's Dip demolished the 3rd sandbag sangar on the right + partly demolished second sangar.  They fired from Vowles old 2 gun position.  The 8th Batty + 5" Hows of 69th Bde covered him.  The place we fired from is protected only by a sandbag parapet on its left + the gun is actually visible from almost all round.  The gun was lain direct through the telescope.  He could just see the top of the parapet over the top of Ryries post trenches.  The Bty Comndr was in No 6 post C. Sqn 6 L.H. with shells just clearing his head + directing the deflexion (Stevenson).  They waited for the Hows. to fire one round + then fired over their the gun - 8 rounds of shrap. first, for range - then HE.  The first H.E. shell penetrated the work abouts centre; They then fired another 10 + completely demolished the work.  The turn onto similar work to NW + 40 yds closer 12 or 15 rds first at this.  Then greatly damaged 10 rds onto barricade of black bags to left front of first work + greatly damaged.  Ceased fire at 1322 (after 16 mins) as being shelled with H.E. from Wine Glass + Olive G.  Probably at least 100 rounds fired at Gun by these batteries - 2 severely wounded 2 slightly.  Fired 40 rds alltogether Lt AW Dodd, Tempy Sergt Croft C.W. ran gun out 2yds when 2 HE shell landed in pit.