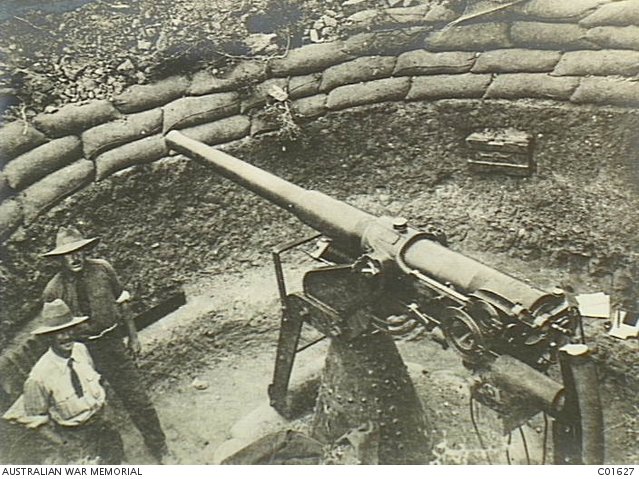 Two Officers standing beside an anti-aircraft gun at the top of a valley near Shrapnel Gully
at Gallipoli - the Hotchkiss QF 12 pounder 12 hundredweight Mk 1 Gun - the above is
probably that referred to by Major Hughes below.
[Courtesy of Australian War Memorial - C01627]

We heard that goods or stores had arrived over at Embros & had a meeting of our Canteen Committee. I suggested I slip across & get in early if I could as all other represtvs would be going next week. I left hurriedly & caught Trawler after a lot of humbugging in getting pass etc. It was very chilly & a strong wind was blowing but I was well wrapped up. On board we had several Turkish Prisoners & as we got to Suvla the sea got mountainous. Things ashore at this place seemed quiet. It was dark as we got to Imbros Isld and the sea was still increasing in size and our little ship heaved and rolled. She stood it all very finely and we entered the Harbour about 7 P.M. I was feeling famished as I had had nothing to eat since morning except a few “Gaba Tepe" Drops – a kind of fried scone cooked by our Cooks at Headquarters.

As soon as I was ashore I got my tent assigned to me & went & had a cup of “Cocoa" as it is called at the Y.M.C.A. Greek place. I tried to sleep at night but it was only a miserable attempt as it was perishingly cold with a high wind blowing & everything seemed to be one the wind with its terrific force.

2000 Alterations to No 3 pit commenced with a view to affording greater protection from enmy fire.

0950 Observed fro H.M.S."HUMBER" which fired 18 rounds on OLIVE GROVE.  Rounds were apparently on target and probably had some effect.  H.M.S."HUMBER"ceased fire 1140

1605 Hostile aircraft passing over F.C.O. going east engaged by our Anti-air craft gun and driven off.