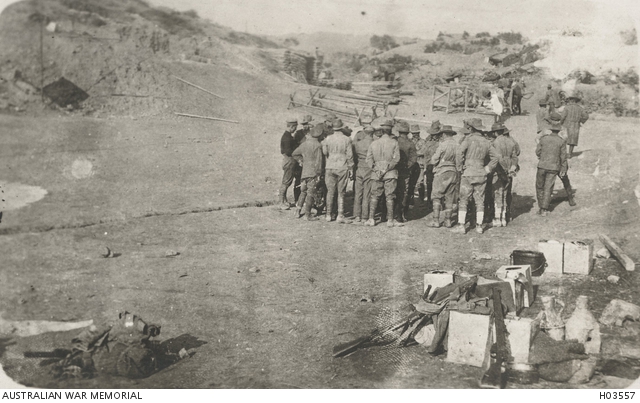 Possibly the same incident, or at least similar, to the one recorded by Will Sparkes below - a
group of Australian soldiers playing "two up" at Browns Dip.  Four minutes after this
photograph was taken, a Turkish shell burst killed for of these men & six others.
[Courtesy of Australian War Memorial - G03557]

Called up at 9th Bty and in the afternoon went to Canteen for them and secured cakes & on the way back a shell lodged in a dressing shed of the Ambulance at Brown’s Dip and killed 3 poor unfortunates who were there while about 4 others were wounded. I saw the poor fellows getting taken away on stretchers and one seemed in a very bad way.

2nd Lieut East W.H. struck off strength of this Battery + transferred to 1st F.A. Bgde. One man evacuated sick to hospital.  The Battery did not fire.

0800 A party of men working in trench just this side of GABA TEPE running paralel with sea.

The remainder of the day passed quietly on this flank.