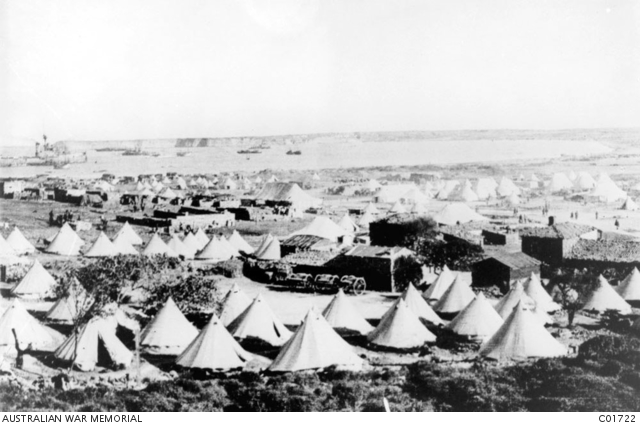 Tent lines at the Allied Camp around Kephalos, on the Aegean island of Imbros.  In the
distance various vessels can be seen in the harbour, & in the middle distance on the left
are stockpiles of stores - Will Sparkes' target on his trip to the island (below).
[Courtesy of Australian War Memorial - C01722]

Woke up early & scouted round for breakfast. Found we were not on ration list but it was being arranged etc. Had a wash & felt a little brighter. The scenes of the this little place was peculiar to most of the Islands in the Aegean Sea. The Port is called Thephelos & all the inhabitants are Greeks who live in tiny Villages somewhat similar to those on Lemnos Island.

Their picturesque costume of vest & semi pantaloon skirt arrangement is a decided change to ones eye after so much Khaki uniform. The velvet caps & vest are much affected and the turned up shoe like the Dutch effect. At Embros it is really a Headquarters where some of the Heads are centred and an airadrome is being erected there. Other large operations are in view. There is a large number of Arabs working under contract. The same old style with drivers adding them on with whips to do their best. The place is also used as a sort of rest to some of the troops stationed at Cape Helles. In the afternoon I did some purchasing at the canteen but found things very unsuitable. Not much to be had I did my bit & then arranged with one of those guarding other goods to look after mine.

I managed to get some Post cards, nuts etc and did a little buying off the celebrated “Bum" Boats which can even be found at Embros.

The Battery did not fire.  Two men sent to Hospital sick + three four men transferred to other units.  Three men joined this Battery from 3rd B.A.C.