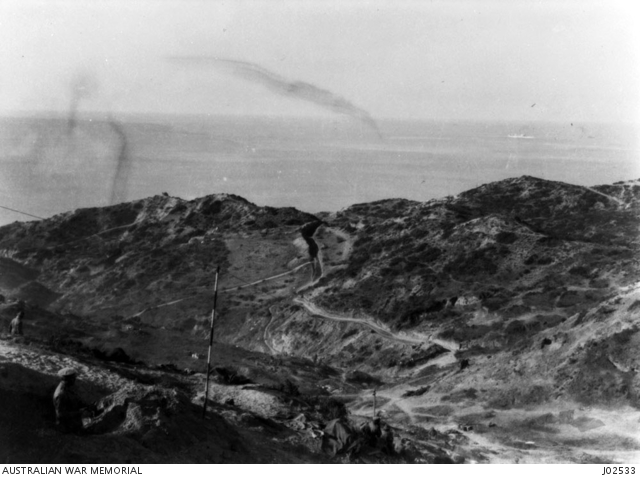 Looking west from the heights of Artillery Road across Clark's Gully & out to sea, in
November 1915 - the path traversed by Will Sparkes on unloading his stores at the pier,
via Clark's Gully, & on to Headquarters near the heights of the Australian position...all
completed after nightfall.
[Courtesy of Australian War Memorial - J02533]

I found I had 50 cases on board. It was a rough & cold journey up to Suvla I felt perished & the spray dashed all over us. The sea was big I arrived at Anzac Pier about midday but as usual there was no one to help me & I had to transfer my boxes to the Horse Boat Barge & then when at Pier up on it. The M.L.O. there got some Infantry chaps to take the stuff off on to the Beach.

I telephoned up & it was nearly 8 P.M before anyone came down with the Wagon etc. QMS McLaren had to telephone before some Adjutant got message. Mc kindly let me have a cup tea while he looked after the stores. After loading up Wagon we started our ride to Headquarters. It was a rough trip along beach over obstacles etc. We could not get up hill & had to get unloaded at Clark’s Gully & a fatigue Party had to cart up the cases. I was fagged after no Breakfast & dinner & hauling about cases. I did not get to sleep till midnight.

1000 Enemy guns from OLIVE GROVE fired at intervals on BEACH during the morning.

At intervals during the afternoon enemy Guns from OLIVE GROVE fired towards the BEACH.