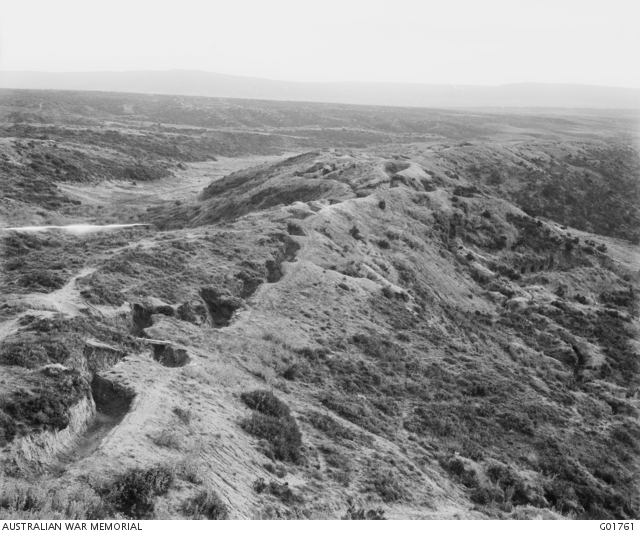 Chatham's Post taken from the ridge above Shell Green looking south - the trenches running
to the right were held by Turkish soldiers (attacked by the 5th Light Horse, below). One of a
series of photographs taken on the Gallipoli Peninsula under the direction of Captain C. E. W.
Bean of the Australian Historical Mission, during the months of February and March, 1919.
[Courtesy of Australian War Memorial - G01761]

To-day I was occupied in handing out orders & receiving cash in place of goods. In the afternoon I went round to North Beach to Y.M.C.A. & arranged to get some items from their Canteen to supply our chaps with. Saw QM. Sergt McLaren of Lowland Battery & had a good talk. Also saw Olly.

The Turkish Artillery were shelling our positions this afternoon but they did not do much damage. Several shells fell round near our 7th Battery and one near my old store which I have now vacated.

Enemy shelled our position, CHATHAMS POST + our newly gained ground to the south all day.  No damage was done to our position.  The Battery did not fire.

1130 Gun from SQ.38.B.C. firing on this position apparently heavy calibre.

1252 Gun from OLIVE GROVE firing on our RIGHT FLANK TRENCHES

Advance was covered by fire from 9th Battery on Communicating Trenches in Poppy Valley.  Rounds were also fired at intervals as [illegible] required by 5th Lowland Battery on Bird Trenches and Vicinity.

Hostile guns opened on Chatham,s Post from Olive Grove Sq.56.W.1. which was engaged by 9th Battery.

0500 At 0500 8th instant fire was again divided on these positions in conjunction with Navy shelling Harris Ridge.