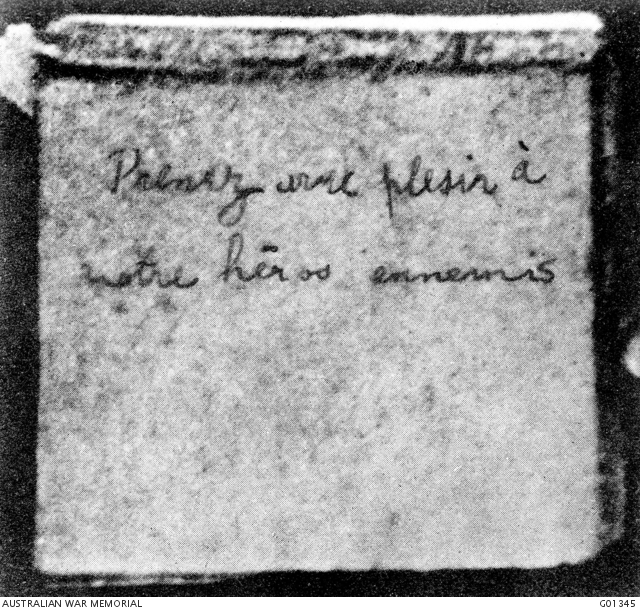 The packet of cigarettes thrown between trenches, photographed by Captain
C. E. W. Bean & mentioned by the war correspondent below - translated, the
inscription reads, "With pleasure to our heroic enemies."
[Courtesy of Australian War Memorial - G01345]

Another quiet morning. A few shells scattered about our area. Canteen to-day for 8th Battery. Called in at Olly’s coming back & had a chat. It was nice & crisp and I enjoyed it. Had to dodge a little shelling.

Lieut Moody from attached to heavy Battery was attached for duty to this Battery + took over duties from this date.  Battery did not fire.

1315 Gun from direction of SQ.68-W-1 firing on Light Horse Trenches and over this position.  Engaged by 8th Batty.

Comparatively quiet on RIGHT FLANK throughout the day.  Observation has been extremely difficult to-day.

There has been a good deal of communication with the Turks of late.  We gave threw over some letters from prisoners saying they were well treated + some pictures of nice fat happily working prisoners in Cairo (our men don't much like doing this but I daresay the authors are right).  Anyway we got the folly answer: "A man who lives by charity is a swine.  We have plenty in our stomachs + something besides plenty; we have our hands on our bodies and our bayonets in our hands.  The English may have plenty of munitions of war but we have our bayonets + our thoughts.  If you are the great nation that you are supposed to be, why don't you act up to high principles + not descend to trying to suborn others from their loyalty to their Sovereign."

A most dignified answer.  We can easily overdo those attempts to make Turks desert.  Still - they - or the Germans - have tried the same thing on us.

3 wks ago Turks had festival for 3 days.  They threw over 2 packets of cigs with inscription as above.  We sent over bully beef.  They threw back a message on stick + stone "Bully Beef non."  We threw some biscuits [illegible] + jam.  This was all about 8.30 to 9.15.  They called out "fini" + waved down with their hands (all had heads up).  Next morning same proceedings.  Interpretor spoke to them from our lines.  They were allowed to go over + get a pocket knife we had thrown over.  Third morning we had orders not to carry on.

1st morning one of our men nipped over parapet + got the cigarettes.

2nd morning one of our officers was on parapet for 2 or 3 mins.  He collected a bomb in mistake for a package (found it was wrapped round as they sometimes do, with white linen.  Bit of scare but found it had faulty fuse + had not gone off).