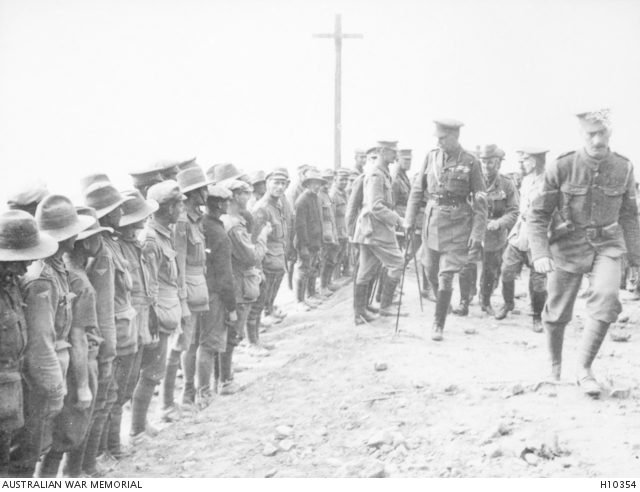 Heard that Kitchener was to come to-day. It was a little like rain and I put my blankets out early to air but as it looked very threatening I went to bring them in before I left Headquarters for the 7th Battery and as I bundled them up a shell came over the ridge very quickly slap-bang – just a few yds from me. It is needless to say that I ducked pretty smartly but possibly after the danger had passed. Another shell followed but hit a little higher up and I cleared out to my dug out. Went to Y.M.C.A. Canteen for Ammunition Column to-day. Saw Olly when I was returning etc.

To-day was a lovely bright clean Autumn day & with a touch of sharpness in the air that did not chill but tingled the blood like draughts of wine.

I stood on the ridge commanding the outlook to the Aegean Sea drinking in with all my soul the beauty of the blue rippling sea, the roughness of the landscape and the sky studded with white clouds like heaps of wool.

In pursuance of request from LONE PINE No 3 Gun fired one round at a hostile trench mortar located in Enemys trenches on LONE PINE effectively silencing it.  It was noticed that the enemy had during the night of 12/13 inst erected barbed wire entanglements in front of BIRD TRENCHES on HARRIS RIDGE.

0830 Gun from direction of SQ.68-W-1 firing at our section of trenches CHATHAMS POST, engaged by 8th.Battery.

0945 A number of horses with saddles on behind GUN RIDGE about 2 deg.right of the WINE GLASS TREE, this target engaged by 8th.Battery.

1100 Gun from direction of SCRUBBY KNOLL firing towards SHELL GREEN.

[Excerpt] The Turks seemed to be registering the length of their fuses (an omen, I suppose) of the shelling we must expect before long.  Dirty yellow clouds burst occasionally in the air.

Three burst over the hill top above us, one of which spattered shrapnel pellets all round + hit another of the poor old navvies when he was sitting on the latrine.  We got under cover for a few minutes.

K. [Kitchener] didn't arrive till the afternoon - we got word presently that it would be 1.15. At about 1.30 a destroyer arrived (from Helles I think) + off he came, with a fairly larg staff of about ten, including a Frenchman - + little Birdwood, in a grey woolen jacket, by his side.  The tall man walked up the pier (with [illegible] brilliant red band on his staff cap towering over everyone else) and shook hands with Godley, White, Howse + the others.  He had scarcely reached the end of the pier when the men tumbled to it - x down they came to the edge of the beach + onto the beach itself.  Men began to run from the dug outs above, hopping over the intermediate scrub + the holes + heaps of relics of old dug outs - some of the men on the beach called for a cheer, + the sound of the cheering brought the whole of the population out brought every Australian on the hillside out of his burrow + scuttling down like rabbits. The tall reg red cap was rapidly closed in amongst them - bu they kept a path + as the red cheeks turned + spoke to one man + another they cheered him - they, the soldiers - no officer leading off or anything of that sort.  It was a purely soldiers' welcome.  He said to them "The King asked me to tell you how splendidly he thinks you have done - You have done splendidly - better even than I thought you would."

The men would not have cheered many men - they would never have cheered Ian Hamilton like that, for all his kindness + gentle manners.  K. is the sort of man every Australian admires - not a polished man but a determined one, an uncompromising worker.  These men honestly admire him far more than the British do; the British really admire a man who has more display about him, but these men honestly + quite sincerely like the absence of display - they have thought it all out for themselves, + when he comes along nothing will prevent them from each paying their honest tribute of admiration.  K. received a welcome of which I doubt whether he knows the value.  There are not many men that Australians would honour in that way.