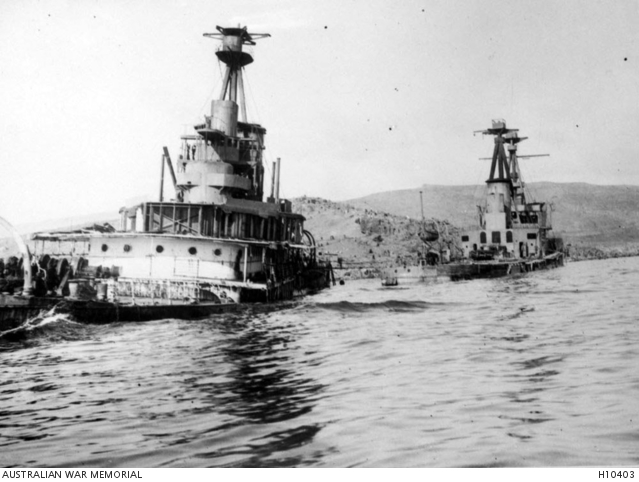 Two dummy warships (dressed up merchant steamers) sunk to form a breakwater in Kephalos
Harbour at Imbros - Will Sparkes' first impression of the Greek island, below.
[Courtesy of Australian War Memorial - H10403]

Woke up very refreshed. The shed in which I slept was right on the beach & the roll of the waves on the shore was very sweet music. I was to go along to the landing stage to see if the ship was leaving. Life under active service does not tend to improve ones morals as far as cribbing is concerned. To use an Australianism one is rather forced – I should say tempted but the word is hardly strong enough – to pinch anything in the form of eatables that might be handy. Those working on the Beach have ample opportunity to make use of their “pinching" propensities.

During the last few days a good deal of shelling has been taking place on the other side of the Peninsula. The rolling boom of heavy guns can be heard daily.

At last after a good deal of waiting I boarded the Keravonos a small Ship & we were taken out to a trawler anchored out.

There was a good deal of messing about transferring from one boat to another. As we were anchored out a splendid view was obtained of our Battle Zone & ridges & the scene looked pretty dotted here & there with white tent. The trip up to cape Helles was enjoyable. There one could see the wonderful preparations made on building a landing stage etc. a wall of stone & then some large ships were sunk to make a breakwall. You could see Motor Cycles Horses etc. Every kind of tent & erected. It looked quite like a huge town. Near where we anchored we could see the HMS Majestic which had been torpedoed. She was laying bottom up. Arrived at Embros at dusk. The sea was very rough and it was blowing cold but after over 4 months on the peninsular under fire since I returned wounded, it was a great relief. In coming into the wharf or Pier it was situated in a little Harbour & on the outer side to make a breakwater some half dozen large steamers had been sunk. I was soon ashore but in the dark nothing but tents could be seen. After making arrangements for a tent to sleep in at the rest camp I went out for a walk and saw the little that could be viewed. The YMCA had a small refreshment Canteen run under contract with the Greeks. It was a rather poor affair – just a cup of weak cocoa & buns – occasionally I should say the later were supplied. There was a large tent there also in which a Piano was installed & a few tables.

I returned early to my tenet where there was a Quarter Master Sergeant, Sergeant Major & a few others living.

1715 Enemy’s gun f observed firing from GUN RIDGE Square 68-W-1 onto our position.  Only about six rounds were fired by this gun no damage being done.  One man transferred from 3 B.A.C. reported to Battery for duty.