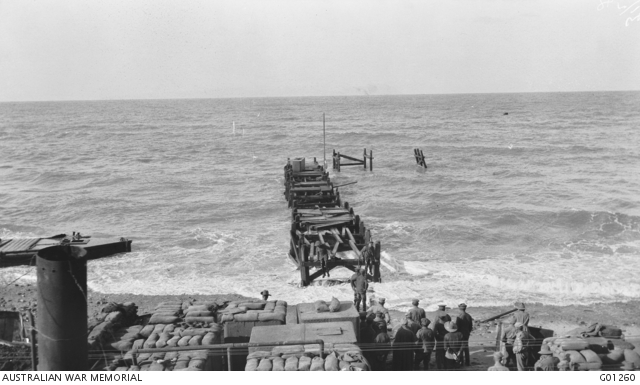 The 18th November, after the storm of the 17th - Watson's Pier had to be repaired, but
it was never again thoroughly completed.
[Courtesy of Australian War Memorial - G01260]

The morning opened up fine but chilly. The sea had not gone down very much. Everywhere the Infantry were wandering about trying to get dry & warm. Blankets were everywhere out on the grass & shrubs to dry. The Turkish Artillery opened up early in the morning & made things lively. Gave us plenty of “Hurry ups” as our chaps say. In the afternoon I went to Y.M.C.A. Canteen & again enjoyed Owens & McDonald cooking dinner afterwards visited the Battgoo Battery (Lowlands) Division and saw my friend McLaren R.Q.M.S. and on my way back called in to see Olly Gunderson. On the beach it was chaos – the result of last night’s storm was only too evident. All the jetties but one had gone – Barges & Tugs were ashore. The Tug “Gaby" had been sunk & I am told had some of our outgoing mails on. This was very unfortunate as it was really the Xmas mail and one could not tell what letters had been lost. I had to take refuge on my returning as the shelling was very free. I decided to take teas with Olly G and went the sun set. I started on my return to our Headquarters. The sap through which we generally travelled was full up of water – the result of last night’s storm – and it meant the road in the open had to be traversed. I had only gone a little way when I heard a shell coming and in the instant – a fleeting moment of time – I could tell it was coming close to me. I dived not unceremoniously into a hole and not a second too soon as the shell landed about a dozen yards beyond me. It rather gives one palpitation of the heart, but I was lucky as it was a percussion shell. Had it been a fine shrapnel it would have caught me badly.

I do not relate all the narrow escapes I have. In the position we are in they happen so often and it often seems as if many of us here have charmed lives.

1640 Howitzer Battery fired on enemy Trenches in front of F.C.O.