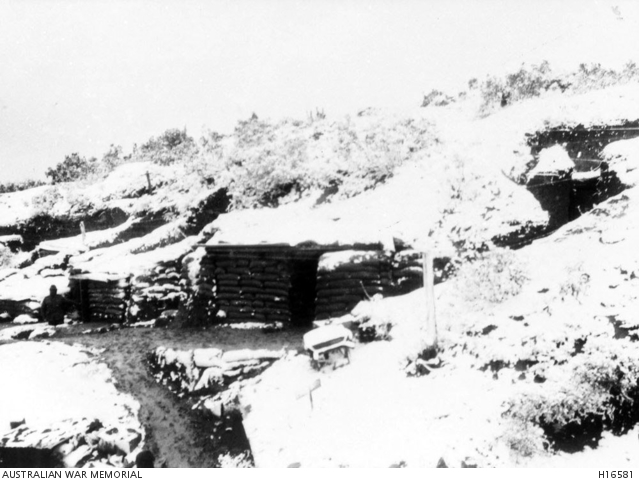 AIF Artillery Headquarters, near 1st Divisional Headquarters at the top of
White's Valley, after the blizzard on morning of the 28th November.
[Courtesy of Australian War Memorial - H16581]

What a big surprise to-day. On waking up found it was snowing heavily. What a picture of whiteness everywhere it was lovely to look on but how cold. My feet were like lumps of lead. I can now well imagine the scenes pictured of Xmas snow storms etc. How the snowflakes dance merrily along sometimes to cling to me or to go on to some shrub where it hung till it became part of an icle. Some were whirled away down to the gullies where the snow was feet deep. The wind made it piercing cold. We had a meeting of Canteen Committee & fixed prices of goods on hand as we had to provide for boxes etc for transport. I went & visited 7th Battery & slipped & slided all over the place. Mud & slush everywhere & the snow commenced to fall a little intermittently & in places it was thawing. It looked a thoroughly Siberian Scene.

It took me a long time to get warm when I went between my blankets to-night but I pitied the Infantry who were not so well placed as we were. Some of the poor beggars had only arrived from Lemnos & had to dig positions while it was snowing. 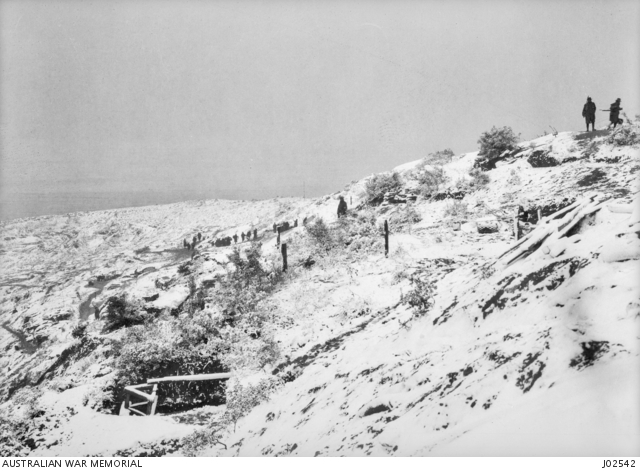 The view, looking south down White's Valley from the 1st Division Heaquarters,
after the blizzard on the morning of the 28th November.
[Courtesy of Australian War Memorial - J02542]

During the night 27/28 snow fell + th continued to fall till about 1100 on 28th which blocked out all the distant landscape + made observation almost impossible.  The Battery did not fire. 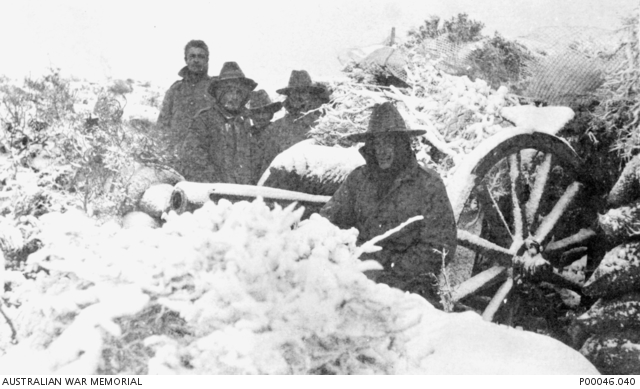 1550 Enemy gun from direction of OLIVE GROVE fired on our Right flank.Not located.

Snow started to fall at about 0200 and continued intermittently during the day making observation difficult. 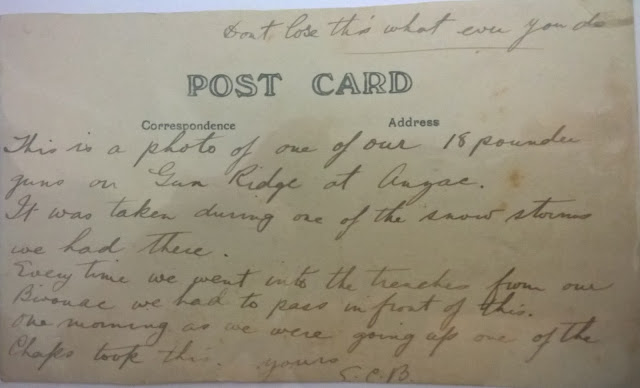 A post card written home to Australia from Gallipoli, with a copy of the above
snow-covered 18 pounder on the reverse - the card has been trimmed, however
appears to be signed S.G.B, so may well have been written by Sergeant Stanley
George Brearley, who appears in the photo of the frozen gun (sitting foreground,
right).  The letter reads, "Don't lose this whatever you do.  This is a photo of one
of our 18 pounder guns on Gun Ridge at Anzac.  It was taken during one of the snow
storms we had there.  Every time we went into the trenches from our Bivouac we had
to pass in front of this.  One morning as we were going up one of the Chaps took this."
[Author's private collection]