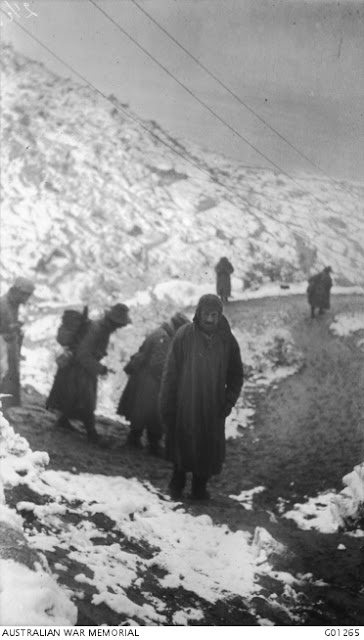 Major A. M. Martyn standing in the snow outside Artillery Headquarters
on the 29th November.  In the background are men from the 24th Battalion
being relieved from Lone Pine.  The attitude of the man on the left indicates
the heaviness of the kit he is carrying.
[Courtesy of Australian War Memorial - G01265]

To-day I received orders for Canteen goods fixed up lists in preparation & issued the Headquarters lot. It was devilish cold & the snow was still thick on the ground. I could not get my feet warm. The wind was blowing hard & it made the ground dray & frozen. Everything was hard as if frozen together. It was amazing to see our Boys gathering snow in cups to melt it down for boiling purposes as the supply of water was extremely short & we were on half rations. With the boisterous weather nothing could be landed on the beach. The Turks shelled us to-day and a number of our lads were wounded & killed up on Lone Pine quarter.

1440 A large body of enemy troops moving in file across the OLD PARADE GROUND towards RUINS, movement continuous to 1630.  Number estimated between 1500 and 2000. followed by Mule Transport.  Movement south to north.

1630 Enemy troops moving about OLD PARADE GROUND in scattered formation as if previous body of enemy troops had bivouced in vicinity of WHITE RUINS.

The following letter has been received from Driver Jas. McKenzie, of the 7th battery of the 3rd Field Artillery Brigade, under date of Oasis Camp, Heliopolis, near Cairo, November 29:-Your welcome letter of the 16th of October to hand. I showed it to your son, Bert. He was very pleased at hearing from you. I also told him about that parcel you sent, but he has not received it up to date. I suppose you will have heard of his promotion. He is a bombadier now, and is doing well. I have just come out of the hospital at Alexandria, having been operated on for internal hemorrhage, and I am at present on base duty here in Cairo. I am getting better, but very slowly. Still, considering the cold weather is coming on I should soon be myself again. Norman Ploetz and a fellow named O'Keeffe, with the Infantry transport, are here, and all wish to be remembered to you, also Dan. Donohue. He is in the battery now, having been promoted to this from the ammunition column. You were asking me about the re-union of the Queenslanders who came over on the Rangatira, with the first contingent. It was held at the Grand Hotel, Camp of Caesar near Alexandria, and was a great success, so far as the evening was concerned, both to officers and the men, but a lot of old familiar faces were missing from those who came over with us. Some are on the Peninsula, doing their share to uphold the honour of Australia, in other cases duty has been nobly done. Lots of new fellows are arriving here every week from Australia as reinforcements to the different units. Cairo is alive with our lads. I am sure when the war is over Egypt, if no other country, will always remember the boys from the Southern Cross, for I do not think the business people have had such a harvest for many a day. I suppose you hear sometimes of what the press or rather, I should say of what some private individuals write, - respecting the conduct of the troops here. All I can say is that with the exception of a couple of cases, I would call the conduct excellent, especially when you take into consideration the numbers there are, all within a radius of a few miles, and with only the one town to spend leisure hours in. That town is one of the so-called "liveliest" in the world-there is nothing in Australia to compare with it. I hear some of the reinforcements are grumbling at having so much training before getting to the Dardanelles or Suez Canal. I wonder what they would have said if they had had to go through what the original 9th Infantry had to do every day before they were allowed to fight at the front. Men here belonging to any of the States cannot praise the original 9th sufficiently-that is before they went to Gallipoli, and everyone knows, or should know by this, that it wanted fighting men, and well trained men at that, to go through what they experienced. I think I have just about exhausted my stock of news at present, but will drop you a line later, as we may be drafted away any day from here either as light horse or as gunners to our battery, which is still in action on Anzac. I suppose you would read about one of our officers receiving a military cross for keeping his gun in action during the August advance. He is a fine young fellow named P. J. Ross, who belongs to the Toowoomba family of Ross and Co. Aerated Water Manufacturers, and is an old Brisbane militia officer, who came in charge of one of our sections. Wishing you the compliments of the season, and hope you are spared to see many more.

Published in the Queensland Times, on the 1st February 1916.
[Courtesy of National Library of Australia - TROVE]