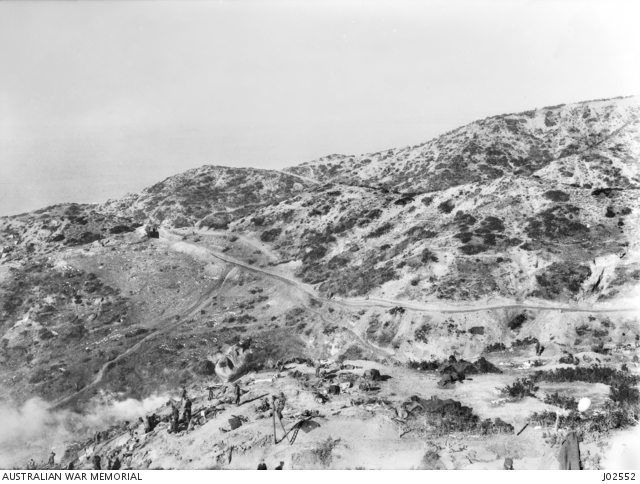 
It was a little warmer to-day & the snow commenced to thaw. The ground which had been frozen hard soon became soft again & although it was previously as dry as it possibly could be from appearances it soon became a quagmire. Wherever there was much traffic it was muddy & soft & where the water lay in any corner it was frozen into ice. The mountains in the far distance Islands of the Aegean Sea looked a picture in the Sun. I was busy issuing out to the various Units again to-day. Went down to Olly Gunderson & gave him a few stores. It was late & a cool trip to the Beach.

One man evacuated to hospital sick.

1147 Enemy 75.m.m.gun from direction of SCRUBBY KNOLL fired on our RIGHT FLANK.  A gun from the WINE GLASS BATTERY, unlocated, fired towards 3rd.Battery.  Lowland Battery retaliated.

1220 Enemy aircraft observed going North.  Fired on by our Anti-aircraftGun.

1305 A gun from Right of OLIVE GROVE fired towards BEACH

1355 8th.Battery fired a few rounds in vicinity of TWIN TRENCHES.

1415 Enemy guns from OLIVE GROVE again fired 1 round going towards LONE PINE and the remainder towards BEACH.  Three different guns were observed.  8th.9th.and Heavy Batteries retaliated, and a steady fire was continued until 1545 during which times the WINE GLASS guns again firedand Lowland Battery fired a few rounds in vicinity of PINE RIDGE TRENCHES.

1610 Fire was again commenced by enemy 75.m.m.gun from SCRUBBY KNOLL.  A WINE GLASS GUNand another unlocated gun from the vicinity of CEMENT EMPLACEMENT, all of which fired towards CHATHAMS POST.Lowland Battery fired on WINE GLASS,8th and 9th.Batteries on to OLIVE GROVE.