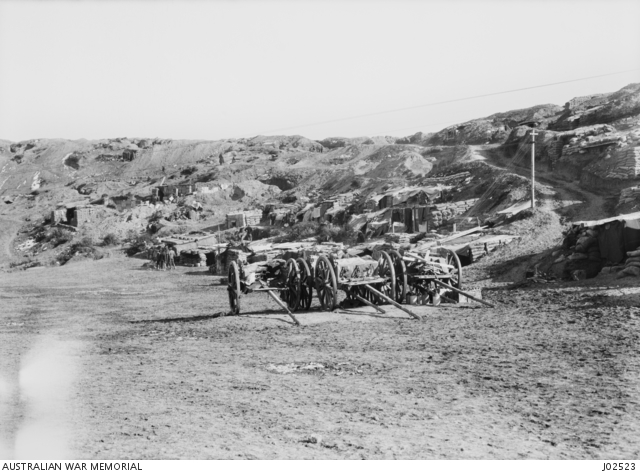 The Headquarters of the 2nd Light Horse Brigade on Shell Green, with gun limbers &
the gun road up the hill, in November 1915 - at the top of the road is the approximate
site of the first gun position of the 7th Battery.
[Courtesy of Australian War Memorial - J02523]

“Beachy" was very busy early and was even shelling all through the night intermittently. I went to Canteen again & secured a few nuts & figs for the 7th Battery. I had tea with the Battgoo Battery (my friend Q.M.S McLaren of the Lowland Scottish Battery).

0845 Enemys gun firing from direction of SCRUBBY KNOLL Square 80-Z-2 engaged our No 3 Gun + succeeded in obtaining a direct hit before the gun could be withdrawn damaging shield, spring case + rockingbar sights.  The gun was withdrawn for repairs + a dummy gun substituted at dusk.

0845 Gun firing from position south of SCRUBBY KNOLL on 7th.Battery, obtained direct hits on their No.3.Gun putting it out of action.

1130 An unlocated gun fired from the direction of CEMENT EMPLACEMENT towards CHATHAMS POST.

OLIVE GROVE GUNS have been firing on the BEACH intermittently but consistently for the last two days and nights.  I would suggest that the Navy be asked to search the OLIVE GROVE with heavy fire if they continue their fire tomorrow 20th.inst..