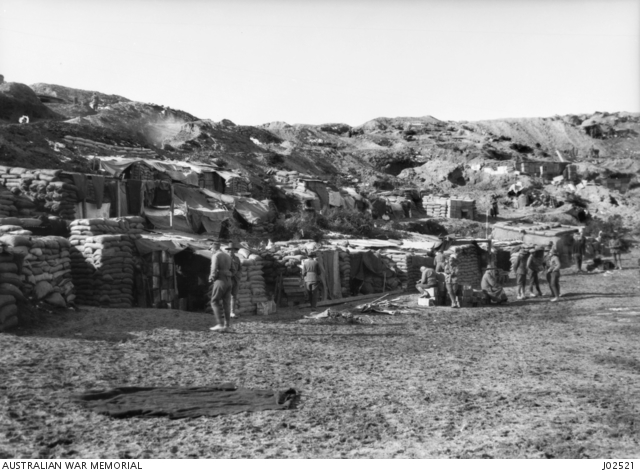 The Headquarters of the 2nd Light Horse Brigade at the top of Shell Green, not far
below the 7th Battery's gun pits, in November 1915.
[Courtesy of Australian War Memorial - J02521]

To-day it was showery and looked as if we were in for some heavy weather. Owing to bad sea the 3rd Brigade Infantry could not leave last evening for a spell at Lemnos. Went Y.M.C.A. Canteen for 7th Battery but found no supplies had come across. The Turkish Artillery opened up on all our positions and sent across a big lot of shells. On the beach a number of men were wounded. It rained heavy in the evening.

Battery did not fire.  One man evacuated sick to hospital.

1010 Enemy Battery opened from OLIVE GROVE LEFT SEC.firing BEACH.  The 8th, 9th and Heavy Batteries retaliated.  Our Howitzer firing on enemy trenches.  The first few rounds from OLIVE GROVE were observed, but later shots were not seen.  The Turkish fired had ceased by 1045 but was resumed at 1100.Our Batteries again retaliating.  Observation of enemy's guns was diffi difficult owing to the strong wind quickly scattering any smoke and dust arising.

1115 While our Batteries were engaged a heavy gun was heard to fire from a direction south of OLIVE GROVE firing towards LONE PINE.

1310 A gun from left corner of CORNFIELD to left of WINE GLASS TREE fired towards LONE PINE and 8th.Battery.engaged it.

1350 Gun from the direction of CEMENT EMPLACEMENT fired towards CHATHAM'S POST 8th.Battery retaliated.