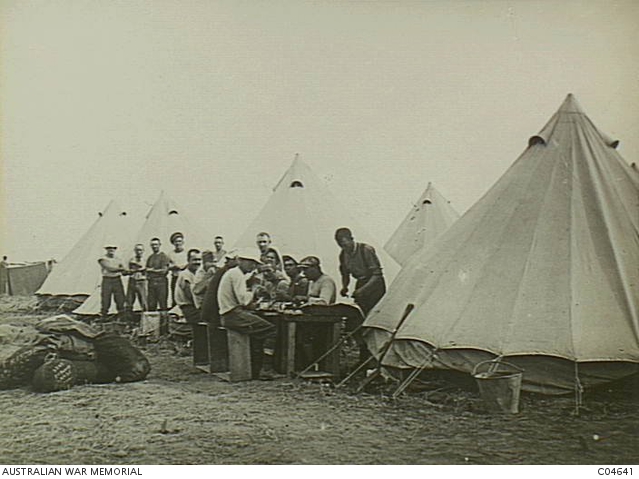 Part of the tent lines at Imbros - whilst effective at keeping the rain out, they did little in
the way of keeping the cold out, as Will Sparkes discovered during his stay (below).
[Courtesy of Australian War Memorial - C04641]

Saw Capt Stowe & arranged to buy next day. I visited Owens Y.M.C.A. & had a chat with him and more than likely I will purchase a good deal of Oranges from him. I spent a very miserable day. The wind was simply awful & chilled one to the bones. Luckily I had my Balaclava cap & it greatly amused the Greeks. In my tent was Sergeant W.R. Smith 32 Avenue Rd Forrest gate Essex England and he and I chummed up. That evening we made ourselves a little bit more comfortable. I secured 2 other blankets under me, 4 over me – my mits on also my Balaclava cap & my Canadian Jacket & yet I was a little chilly. The wind found its way under the gaps of the tent & in at the door but I must say I slept a little better. The clouds are very heavy & the sea is roaring outside.

Steamers went out owing to its roughness. I was lucky to miss the early boat over the other day as the 1st one got badly knocked about against the wind up from Cape Helles.

Battery did not fire.  Five reinforcements joined the Battery.

0955 Enemy guns from OLIVE GROVE fired at intervals on BEACH, cannot locate it.

1335 Gun from OLIVE GROVE ,unlocated, but sounding like RT.SEC. fired on BEACH.

1420 X 1st.Infantry Brigade reported having seen enemy Infantry estimated one (1) Battalion in vicinity of WHITE RUINS.  Our Observers were unable to see enemy in any numbers in vicinity but small parties are frequently observed.  This spot should be worth an aerial reconaissance with a view to Navy fire on locality.

OLIVE GROVE GUNS continued to fire on our BEACH at intervals during day and night.  We have been adopting a retaliatory offensive on enemy trenches and Observations Stations when unable to locate hostile Guns.