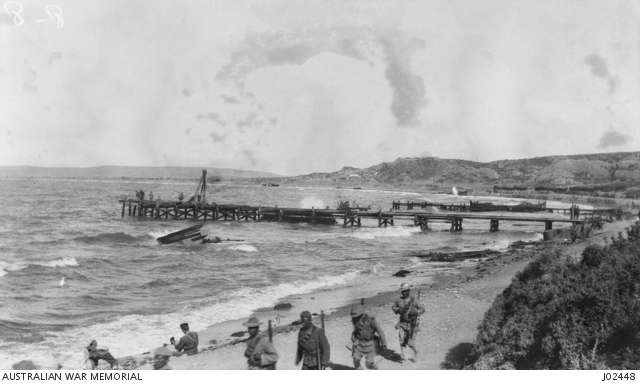 A message arrived other cases were coming over by Trawler to-day & I went down & met them. Eltham did not come & I again had to haul about cases several times. One bag seemed to be missing & I was worried. It ultimately came to light & was found on end of Pier. The weather seemed to be getting bad & things were busy all around the landing Pier getting things secured. The wind & sea rose & in less than an hour everything was disturbed. I had to ship the cases again to side of bank. A guard came down & relieved me & I went to tea with McLaren Lowland Battery. It rained heavy & I got coats for my men from McLaren. After tea a Corp & three men came along to Guard cases for the night as the Wagon could not get down owing to the sea breaking all along the shore. It was a wild night indeed. I went over to McLaren & in getting back to beach I fell into a sap about 12 feet deep. I was more frightened than injured but my eye hit side of wall. It was dark black as Hades & I had to grope my way about & feel my feet in between the lightning flashes. It thundered & crashed just like an Australian Storm. In fact in that sense quite enjoyed it. In getting to Headquarters I had to grope & slip my way in the mud & I was fairly fagged – wet etc I had a good nip of rum on getting into bed.

The Battery did not fire.  No 3 Gun repaired + replaced in its pit.  The pit was reconstructed to facilitate the running in + out of the Gun.

0830 Enemy gun from OLIVE GROVE fired in direction of BEACH.unlocated.

1140 Enemy gun from direction of SCRUBBY KNOLL fired over F.C.O.

Throughout the day guns from OLIVE GROVE have maintained a steady fire at irregular intervals.