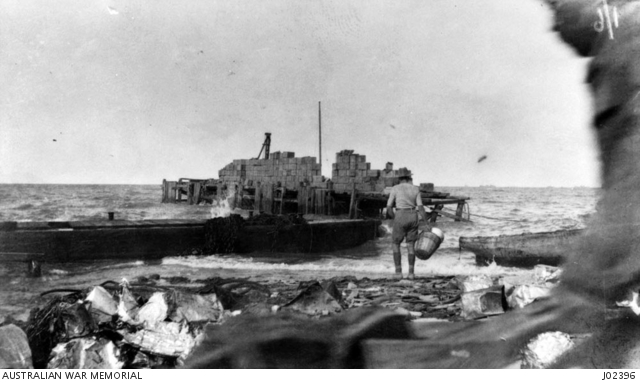 A soldier gazes at Watson's Pier & wreckage on the beach at Anzac following damage by
rough seas in the storm of the 17th November - forty feet of trestle construction was torn
away from the pier when a lighter broke through it during the storm.
[Courtesy of Australian War Memorial - J02396]

It was another angry day. Cloudy and a stormy wind blowing which made the sea a wonderful sight. The waves lashing into heaps of spray & coming onto the beach in large breakers carrying everything before it. The jetties could hardly be seen & it looked as if they would go any moment. A steamer ashore at North Beach was a picture. The breakers dashing against leapt up her bridge and broke over the top of the masts. The beach was a scene of debris – biscuit boxes, tins, pieces of barges & other floating matter. The Trawlers & other ships anchored out must have anticipated the storm to increase as they had all cleared out to get under the lea of some island for protection. They were well advised for the angry sea was like a demon lashed to fury later and the mountainous seas something magnificent to view. There was a rumour that one of the Trawlers had sunk with all hands but I did not hear that the rumour was

About 8 PM I was just going to make my bunk and the very heavens seemed to open and let forth their addition to the discomforture of all. I have experience heavy rain in Qld but it came down in torrents here but we can be thankful it did not last long. Unfortunately the damage was done though. Dug outs were full of water – trenches had fallen in & poor hapless infantrymen were wandering everywhere wet through & not a dry spot to lay their heads on. Poor devils I did pity them. The water flooded into my dug out but I managed to get a dry spot in an underground store.

Battery did not fire.  One man rejoined unit from Hospital.

1210 Gun from the right of GUN RIDGE(unlocated) fired on our RIGHT FLANK TRENCHES.

Owing to the high wind and dust observations were made difficult during the day.