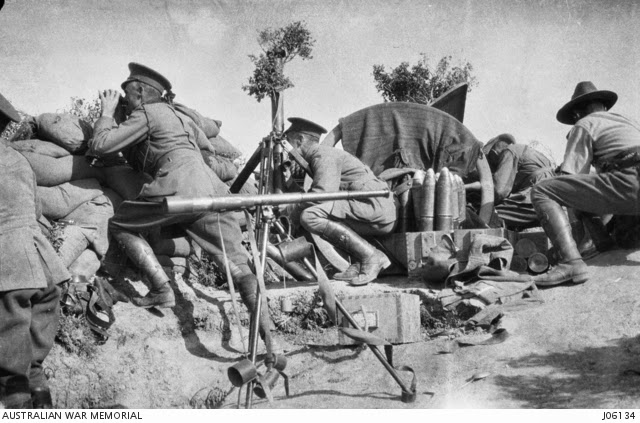 One of the 7th Battery's guns in action on the 30th April 1915 - Major Hughes
(crouching centre) is at the range finder, & Col. Rosenthal (just left of centre) is
observing over the parapet with field-glasses.
[Courtesy of Australian War Memorial - J06134]

I should imagine that if we ever get back to civil life we shall all have the hump. Digging stooping down - while on your knees in every conceivable position - creeping along bent down. Our Colonel about whom I have often written has been up to his old tricks.

We built our gun pit and also a sleeping apartment with a trench leading to the pit. Our worthy Col cooly came along & took possession of the apartment & trench for himself & staff. He never asked my permission & he stopped men going out through the trench to an outpost which afforded protection in leaving the firing line. He wanted our sand bags etc [illegible]

Last night was fairly quiet & we had the opportunity of getting a little sleep.

As far as accoutrements are concerned things are a bit strained. We are even wearing Turkish items such as coats . Our trenches are some miles in length & orders are passed along etc

We continue to strengthen our trenches.  In the afternoon the enemy attacked with the bayonet we strongly shelled the attack which was repulsed.  An enemy Batty then opened on us from a concealed position S.E. of KAPA TEPE but they inflicted no damage.  Gnr Von Steiglitz wounded by rifle bullets in shoulder Fitter Price slight wounded by bullet striking his binoculars.  Only desultory rifle fire at night. 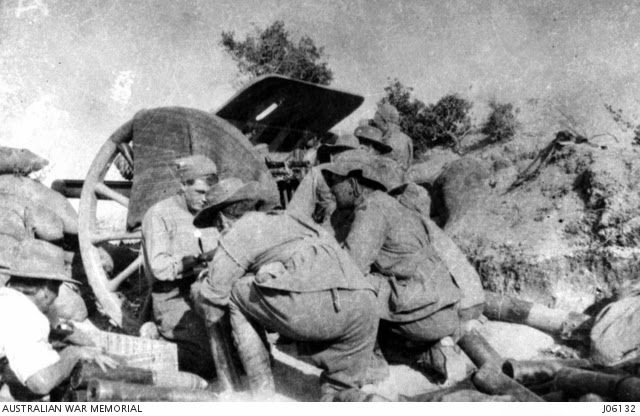 Comparatively quiet morning. Col MacLagan with 3rd Infantry Brigade relieved troops on this flank. Generals Birdwood, Bridges and Walker with me inspecting position and discussing situation. This afternoon enemy again came along Contour 400 in fairly large numbers. We opened fire using about 80 rounds, getting good effect. A 6" gun opened fire on us about 5 o’clock from our Right Flank. Capt Leslie engaged it with time shrapnel, also HMS "London" but latter would not correct line. Enemy fired 4 rounds and then ceased. We had a fairly quiet night.

The casualties to date in our Brigade areas follows:-