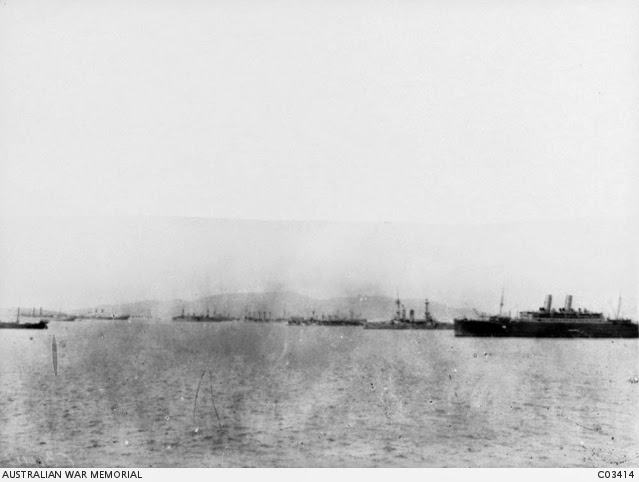 We are to leave today.

Soldiers of France and of the King.

Before us lies an adventure unprecedented in modern war.

Together with our comrades of the Fleet we are about to force a landing upon an open beach in face of positions which have been vaunted by our enemies as impregnable.

The landing will be made and by help of God & the Navy the positions will be stormed & the War brought one step nearer to a glorious close.

"Remember" said Lord Kitchener when bidding adieu to your commander. "Remeber once you set foot upon the Gallipoli Peninsula, you must fight the thing through to a finish."

The whole world will be watching our progress. Let us prove ourselves worthy of the great feat of arms entrusted to us.

We lifted anchored and you can understand the thrill excitement as we steamed out between the many ships anchored in the Harbour our joy was shortlived as we just got outside and down went the pick to use one our well known nautical phrases. A number of other steamers came out and anchored near us. Several of the Cruisers and Torpedo had evidently got orders to proceed right in and they passed us in all their majesty to be followed later by Transports. I went to my blankets & you can hardly call it a bunk - in deck hoping to wake up next morning off Gallipoli.

Chief Officer secured a Tug yesterday and was appointed her Skipper to assist in towing troops ashore at Gallipoli Peninsula. The Second Officer is with him also to act as relief Skipper, and a crew of firemen etc also went from this ship. The chief went off this morning at 7AM. Standing on his bridge giving orders he was as proud as a peacock and as "happy as Larry". We left our anchorage a few minutes after 4, and steamed to an anchorage in the outer harbour outside the boom.

We lined troops on deck and saluted Men O’ War as we passed down between them and the Transports. The sight this evening was really beautiful, a glassy sea, several Transports anchored and others moving into anchorages in the outer Harbour, some Transports moving out to sea towing horse boats etc, escorted by three Men O’ War, British, French and Russian, Torpedo destroyers and Submarines and no end of Transports, and then just to make the picture complete a fine large waterplane manoeuvred over us in the setting sun. As darkness fell, a large Hospital ship lying outside turned on her lights. All her ports are screwed with [indecipherable] glass, and a large Red Cross device in red lamps is emblazoned on her side. The reflection in the water is very pretty. Then to finish off the whole scene the search lights on shore lit up the entrance to the Bay where booms are stretched across. Ahead of us out to sea are Destroyers and Torpedo boats also a couple of Men O’ War acting as sentries over us. I don’t know when I have seen a finer sight. I should say there were about 150 craft of all kinds, Men O’ War and Transports.

We saw an amusing incident this afternoon. As the three above mentioned Men O’ War headed by the Flagship were proceeding line ahead, the second ship crossed over very close in front of the bows of a moving Transport.

As the ship passed us we noticed Signals flashing from the Flag Ship Search lights and I read the following message. "You should not have crossed the bows of the Transport in the narrows. It was unnecessary and unseamanlike". So someone got a wigging for the manoeuvre.

The Attack on Gallipoli Peninsula is timed for Sunday morning, and we are to remain at Anchor here tomorrow and leave about 1 AM on Saturday night arriving off the Gallipoli coast in time to commence our disembarkation about 8.30 AM. We shall spend tomorrow in overhauling all our equipment seeing that everything is secure and ready for transhipment to Horse and gunboats. Posted my last letter to Nell and Chris and a card to Alvord.