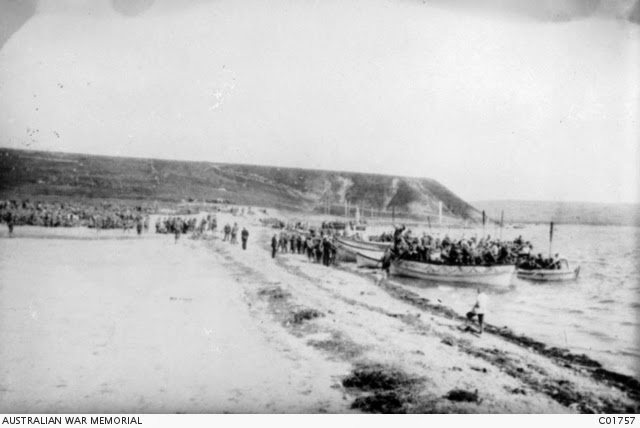 Several rumours or latrines as we call them were circulated to-day. One as to 8 days [illegible] armistice been given to a Torpedo Boat of Turks attacking a transport & 60 of the British being drowned. We took on water to-day from the Sunik


Went ashore this morning with boats crew to Mudros Village. Major King and Capt Rigall accompanied me. We roamed through the village, had a good look at French troops and the quaint streets, houses and people of the Village. Major King took some photographs. We then walked round through the fields to where landing was taking place. We all picked some poppies and daisies to enclose in our last home letters. We had a look through one of the many mills in this island. They do their work exceedingly well. We saw the Mountain Batteries of the 29th Division coming ashore and after seeing their work I am convinced our Field batteries can "run rings" round them and could come into action in many minutes less than these folk appear to do. The Contrast was very marked today. Our ship has today handed over six life boats to the "Suffolk". She was evidently short and we had more than we required. Quite a sensation was caused here by news received today. A Turkish Torpedo boat which evidently came out from Smirna intercepted the Transport "Manitou" from Alexandria, ordered her troops and crew to take to boats prior to being sunk. About 60 troops and crew crowded into a lifeboat, but the davits collapsed and precipitated the occupants of the boat into the water. In the meantime the Torpedo boat had sighted Transport "Osiris" also from Alexandria, and steamed off to treat her in like manner. Her captain however managed to escape, and in the excitement the first steamer also escaped. Both arrived here today. I understand the 60 men were drowned, but whether as a result of the accident or because in steaming away to save the rest they had to be sacrificed I do not know.

We hear that in all probability we shall be moving to our goal on Monday. I have been carefully marking on my maps position of enemy’s guns and trenches as discovered by Aeroplane Reconnaissance, and after afternoon tea I lectured to the Officers in the Saloon, showing them what they were up against. Received letter from Charley. 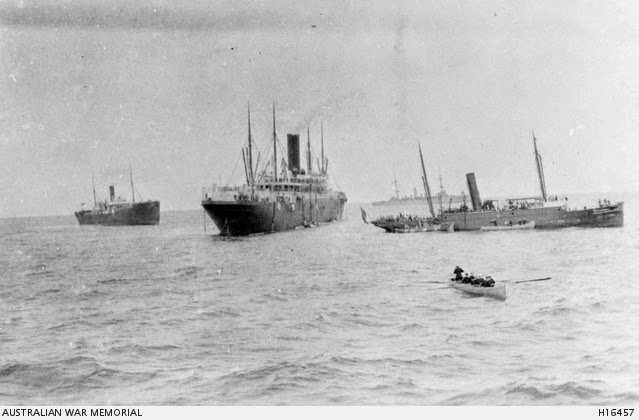 The H.M.T. Manitou attempting to recover men & materials overboard on the
17th April 1915, after being stopped by a Turkish Navy Destroyer enroute to Mudros.
[Courtesy of Australian War Memorial - H16457]