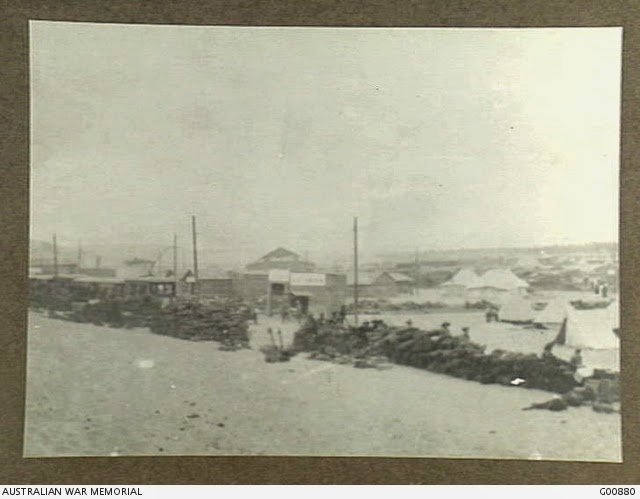 The kits of the 1st Australian Infantry Brigade stacked beside the tramway at
Mena Camp, pending removal to base for storage during the absence of their
owners. The troops did not see their kits again until they returned - taken
5th April 1915.
[Courtesy of Australian War Memorial - G00880]

It was something to see the sun set in its last molten fusion of gold.

To think of the relentless rays of the sun beating from above & [illegible] from below the only way out of it is the few hours of the evening when the sun takes his hands off you & you slip through his fingers into the night.

It is the custom of the arabs at sundown to turn their heads towards towards Mecca & give thanks Well they might do so - for such a release.

Pungent smell of a camel.

A day of fatigues.

Packing &c A fearful hot dusty dry wind - sand &c as if a very inferno had had arisen to bid us farewell.  We left camp about 8 PM what a relief xxxxx Had rough mount. On canteen duty arrived Cairo about 11.30. All entrained in quick time and left at 2.30 am. Tired - the carriages presented a rather scattered appearance. Had a short sleep - arrived at Alexandria at 9.30 am 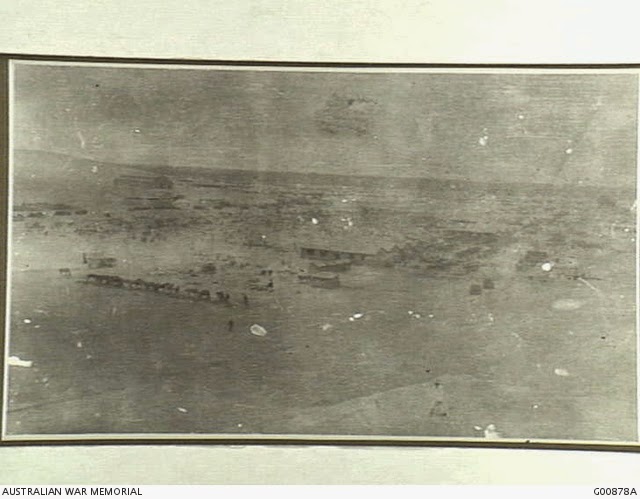 The end of Mena Camp, with almost all tents & equipment having
been removed, 5th April 1915.
[Courtesy of Australian War Memorial - G00878A]


All arrangements complete for departure. I am due to leave Cairo station late tonight. I take over the "Cardiganshire" tomorrow as O.C. Troops. Major King’s coming with me. Tents all struck and returned by noon. Posted last letters to Nell, the three boys, Mother, John Halford, Emma and A.T. Sharp re electric torches.

A most dreadful day at Mena, quite the worst we have had. Last night was particularly bad, and I was awakened about 2 AM by my tent collapsing on top of me. The guys had broken.

Egypt must surely be sending us off "full of grit".