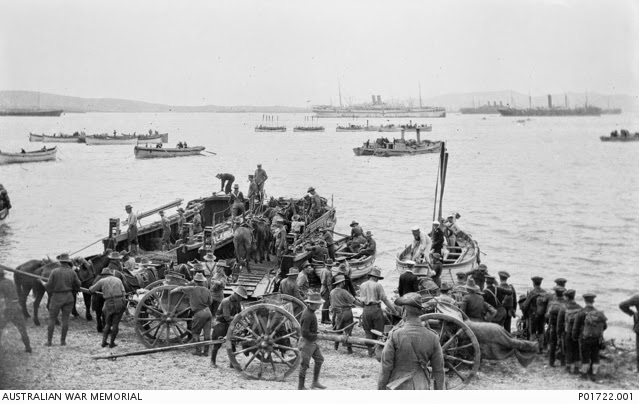 Horses, men & equipment being loaded onto transports from the shore of Mudros Bay,
April 1915 - of note is the shrouded 18 pound field gun, just right of foreground centre.
[Courtesy of Australian War Memorial - P01722.001]

It was an eventual day as we unloaded a number of horses on pontoons and also guns & wagons. Went ashore hooked in and went for a run as if attacking &c. It was good practice for the stupendous task before us. I understand we are to be given the most important work in the land parties against the Turks.


Today has been spent in practising landing, etc. First the 7th Battery disembarked 12 horses by means of ships into a punt, then gun and lumber and 2 wagons and limbers into another punt. These were towed ashore by naval pinnace, horses and vehicles put ashore and afterwards reloaded on to Punts, returned to ships and reslung into hatches. After lunch the 3rd Battery did similar work, and the 3rd BAC also, so that now with the exception of Major Burgess’ battery each unit of my Brigade has had experience of landing work. Colonel Hobbs informed me today that I am to temporarily command the Batteries on this Ship, and that my batteries and Col Johnstone’s batteries are to be landed simultaneously. If we cannot beat him and ensure that the 7th Battery fires first shot I shall be disappointed. All work today most efficiently carried out and without accident, except for one man who fell off a punt and thoroughly enjoyed his swim to the gangway.

I have much admired the Middys’ today handling their picket boats like old salts.