There was an incessant fire all night & a new day dawned with the boom boom of guns. As usual we had plenty of rumours aboard. We got orders to land our guns only & went ashore in Pontoons towed by naval pinnaces. Only gunners went as no horses were taken & we got a big cheer as we left the ship. I was in the second tow & when we got near the shore the enemy commenced to rain shrapnel over us. We had to take cover anywhere we could & as the pinnace was ordered to take cover go back to ship we were left tied up to a buoy. There we stopped till recovered later by another Pinnace. Shrapnel still rained when we were ashore and it was decidedly interesting indeed. We worked like niggers & soon had all our material ashore. It was a matter of getting into the water boots leggings & all & I had to let everything dry on me but no doubt the excitement kept me warm & I felt no ill effects. I was amongst a party who had to go up to the top of the ridge & start gun pits. We strolled up through the brush wood & in one part we had to pass over a piece of green vegetation. We were just in the edge of it & one of our men was shot through the leg (Eagle). Bullets were "pinging" all around us up till about 4 PM we were at our gun pits & orders were revd to stop & take the guns further up on the ridge. This was right on the firing line of trenches a most unprecedented action in warfare. We did this just on dark & had our guns in position in a rough pit to fire that night.

Disembarked 4 guns + 8 am. wagons + landed on beach near the right of our position  + started to man handle guns up gully 3 across shrapnel green + thence on to the top of ridge held by our infantry.  The guns were brought up one by one + opened fire on enemy’s infantry on ridge contour 400 where they were attacking from cover of thick scrub.  One gun of each 4th +1st Battalion was in same position but they were withdrawn during the afternoon + by nightfall 3 guns of 7th Battery were in position.  Gun pits were being dug + fire kept up by our guns the ammunition being carried up by hand from the beach under rifle fire which was continuous.  During the night the enemy still attacked + our guns replied firing shrapnel fuzed at zero when their infant. got up close to our line. 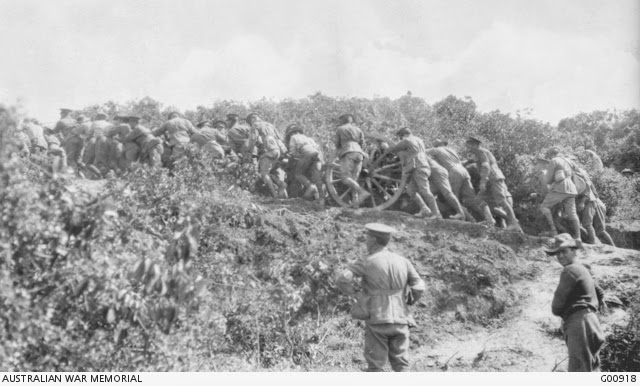 One of the 7th Battery 18 pound field guns being manhandled uphill towards
the infantry lines, from the landing point on Ari Burnu beach, photographed
by Captain C.E.W. Bean on the 26th April 1915.
[Courtesy of Australian War Memorial - G00918]

Early in the morning 1 gun of 1st Battery under Major Sweetland and 1 gun of 4th Battery under Lieut Siddall came into action on the extreme right of ridge (Low Scrub Hill) overlooking Gaba Tepe. The 4th Battery did excellent work all day against Infantry targets ranging from very close ranges to about 1000 yards. Lt Irwin did good work with 1st Battery gun, but the Major in charge proved a great disappointment, but I do not want to say more here. Later in the morning 4 guns and wagons of 7th Battery came ashore and I at once ordered two of that Battery’s guns into position, making a complete Composite Battery. There also came ashore 2 guns of 3rd Battery and 4 guns of 8th Battery. These latter had evidently come ashore in error and were ordered back to their Ships by Col Hobbs. I also, later in the afternoon, ordered back 1st Battery and 4th Battery guns, replacing them with the remaining two guns of 7th Battery, thus having this Battery complete on the position. The Infantry was very happy to see Artillery. Our position was absolutely in the Infantry trenches and on the sky line and of course there was no Infantry in front of our guns. It would have been quite useless to come into action behind the Infantry as then in order to clear the crest we should have had to fire at nothing less than 3000 yards, and our chief targets were from 500 to 1000 yards. The day was very exciting, and our shooting was a marked contrast to Practice camp work where every round is husbanded most carefully. Each gun fired during the day about 400 rounds. All our officers and men stood up to the ordeal splendidly. Got our Telephone communications established with Head Quarters. I was with my orderly Bligh lying down on the crest in a small hole which is later to become my Head Quarters when an Infantryman came rushing over to me bringing a message from Brigadier McKay. Just as he reached within a few yards of me he fell mortally wounded with a rifle bullet. The next instant my two linesman who were completing the laying of telephone cable came to the spot with their heavy reel, and hearing bullets singing past, they made one leap into my hiding place, and with their reel fell in a heap on top of me – and they weren’t very light either.

We spent the night entrenching. Beautiful sight, Search lights and big fleet of Transports and Men O’ War making an ensemble that will never be effaced from the memory of those who were privileged to see it. On the one side Peace – on the other rifle, machine gun and artillery fire.

The fleet bombarded the enemy’s position during the evening. Quiet night. I am in a strong position, though a tactically unsound one, my guns being actually in the Infantry firing line. Colonel Hobbs this evening seemed much affected, and expressed his sincere thanks for my assistance. 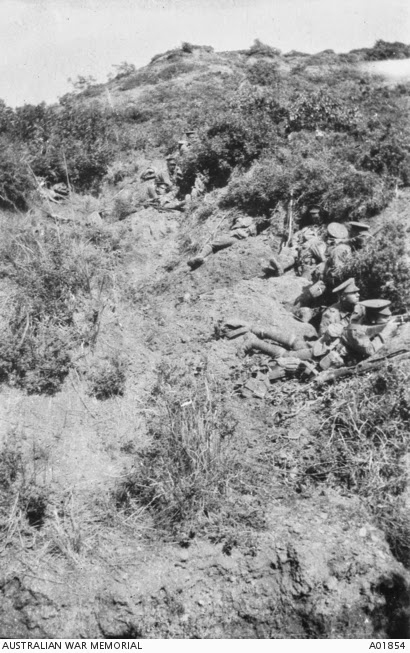 Part of the rough firing line above ANZAC Cove, on the 26th April 1915 - the
7th Battery joined the fight alongside Infantry dug in to similar positions.
[Courtesy of Australian War Memorial - A01854]

At the finish of the first day's fighting [25th April 1915] I found myself in a very rough and ready trench with Captain Plant and Sergt. Saunders. The latter is now Sergeant-major of D Company. We were on the extreme right, near Gaba Tepe, and had several times to get reinforcements to hold a rise. We kept the beggars off all night - stood to arms all the time with fixed bayonets - 'nine rounds in the little tin box and one in the tunnel,' as the Ceylon tea planters are reported to have instructed our recruits in Egypt. It was raining, and no one had eaten since the morning. The next day [26th April 1915] we still kept the Turks at bay, and by the evening the 7th (Qld.) battery got a gun up alongside of us in the trenches, and towards morning fired for the first time in history, I am told, zero shrapnel at the attacking bodies of Turks. It was a fine sight to see the shells fired from the trench we were in - the front and only line between the Turks and the beach - the shells bursting about 50 to 100 yards after leaving the gun.