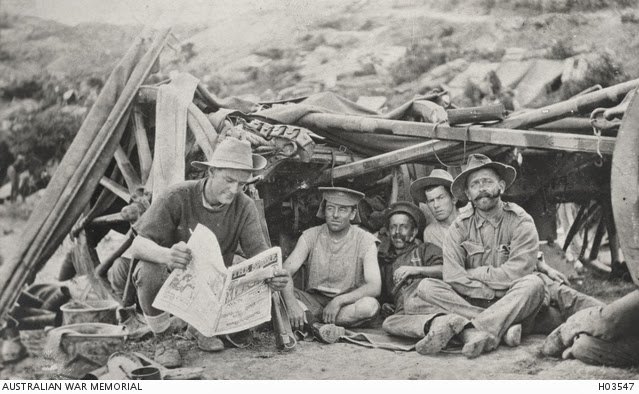 "The First Spell of the 7th Queensland Battery at the Dardanelles: This picture of
the 7th Battery, Queenslanders, was taken just after the big counter-attack made by
the Turks after the Australian landing on the Gallipoli peninsula. The men are taking
their first spell after three consecutive days and nights." Photo & text originally
published in The Sphere on 31st July 1915 - 1665 Gunner Andrew Roderick
McDowall is reading the newspaper.
[Courtesy of Australian War Memorial - H03547]

Stray parties of Turks observed in scrub, but they did not appear in large numbers.  At 10am the personnel of the 7th Battery were relieved on the guns by Major Burgess + detachments of 9th Battery who had come ashore.  The 7th Battery gunners had been continuously on the guns in reliefs for 5 days + nights + were now shelled in dug outs in rear slope of hill.


A quiet night. One attack only, and only once did we Loose off guns. During the day the enemy were observed removing equipment from their dead. In cases where we could locate a number the guns spoke. Major Bergen’s gun located and destroyed two machine gun sand bagged emplacements. Capt Rogers gun located transport and shelled it. The 6" gun on our Right Flank again began talking, also another gun from a position further north. Their observer audaciously came up on the sky line and in consequence got a shell from Rogers. They appear to shift their guns at night. Major Browne brought a section ashore ready for a forward movement tomorrow. It has been bad luck that the balance of guns of my Brigade have up till now not been allowed to land.