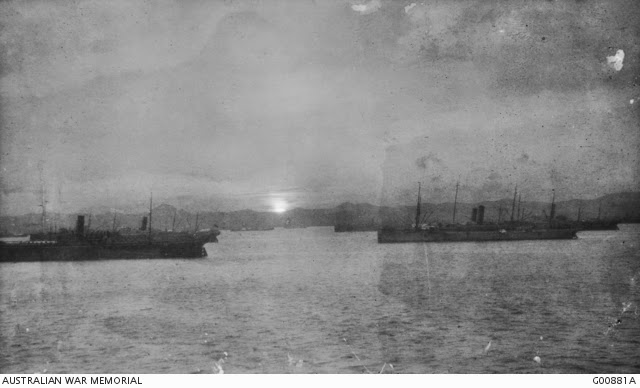 It is said an old campaigner always starts out with what he stands up in and an knife opener. The young campaigner provides the changes of linen & the tins for the old campaigner to open. I am afraid I'm a bit of an old campaigner as I have very little but what I stand up in, I had to buy a sweater off one of the crew as it has been too cold here. We had  a church service this evening on board. It was a talk by Pat Hare. During the day we received certain instructions about our landing in a few days under fire & I went to bed excited over the coming prospect.


An easy day. Some boat loads of men went ashore, several officers with them. Corporal Hare conducted Service in the evening. A very good muster including ships officers and an excellent address. Saw Colonel Hobbs and General Birdwood on the "Minnewaska" during the afternoon. Received letter from Alvord.