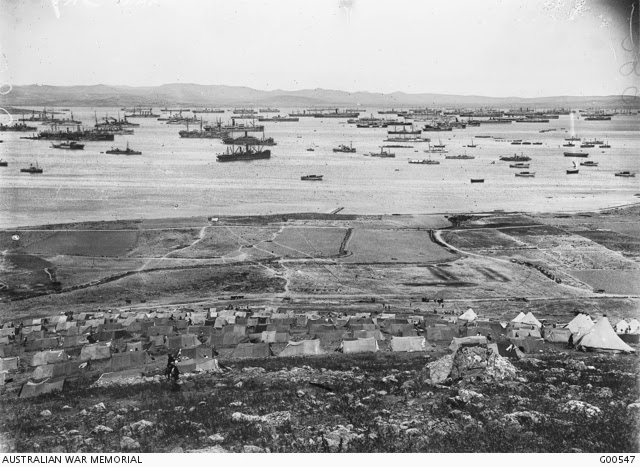 Transports of the Mediterranean Expeditionary Force in Mudros Harbour,
overlooking the French camp in the foreground, mid-April 1915.
[Courtesy of Australian War Memorial - G00547]

Today I went ashore with a Party of our men. It was amusing in these big ships boats to see how some of our men shaped - still we managed to reach the beach without proving we were all landlubbers. It was delightful to get ashore - the greenery of the cultivated fields - the wild flowers. You can imagine what a contrast to the desert we had been working on for the last few months. I wandered along amidst the perfume of the Popies - Daisies & other flowers which dotted the green vegetation everywhere - It was a fairy land of beauty.

Several of us went up to one of the villages - a clump of houses you might call it. It was somewhat similar to an Egyptian village but so much sweeter. Lachna - or some such name as that - one of the Greeks said it was all the residents seem to be of that nationality. These cottages were all of stone but had red tiled roofs - very rural looking. There was only narrow lanes between and there was Greek women sitting weaving thread from the raw cotton. They were very industrious and the bobbin was never idle. They were neatly dressed and clean & so were the children who sit round. Of course we were all very inquisitive and peeped into every corner possible. We could not get much satisfaction from the Greek Folk as they could not understand English. The church was a quaint affair and to my astonishment it had a lovely cut glass chandaleer to which candles were fixed. No seat there in the church so I came to the conclusion they stood or knelt in worship. On the outskirts of this village was a stone shed into which a spring emptied itself and here it appeared to be the Public washhouse. There were stone troughs and while we stood and watched several women brought clothes up on a wooden tray & pushed them into one of the stone troughs. Most of the washing consisted of beating the articles with a wooden patler arrangement. All over the hills adjoining the cultivated fields - were a kind of round stone building to which is fixed a large wheel on the outside & on the wheel sails are set to drive it round. By this means a wheel inside is revolved in an affair like a capstan head & this turns a large stone to grind barley or other grain. The whole of the top of the house can be moved around so that the wheel can be set according to the wind and the sails are thus set and filled. The flour comes down a bag shoot to another bag below which is gradually filled up. You can see about four villages around the Harbour which are much the same as the one I have mentioned. This clustering together in these villages - how like the citification that we term civilization. There were a few sheep grazing peacefully here & there - indeed if one could only blot out the ships in the Harbour - the men in Khaki - how peaceful the whole scene was one could realise the peacefulness of simple nature as it was presented in this beautiful little spot. 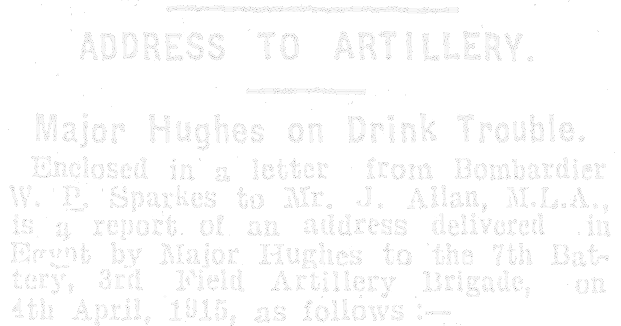 "The force of which we form part having completed its period of training is about to enter in a few days the final test by which an army is judged — that of actual conflict with the enemy.

Before doing so, I wish to emphasise to every man serving in this battery a few facts which in the monotony of our six months' sea voyage and training may have been lost sight of. All European armies have cherished traditions which have been established and glorified by centuries of warfare. The deeds by which various regiments and armies have been distinguished in the past form a very real incentive to gallant actions and creditable conduct by the present members of the corps, which it is difficult perhaps for Australians to understand. But there is one very apparent fact which it is necessary for us to remember. We are about to make traditions, for the Australian army, and it rests more or less with every man, no matter in what rank he is serving to see that the result is in no way discreditable to Australia. In the actual fighting capacity of this battery, I have every confidence, but actual fighting is not the whole of the warfare, and more is required of men in the fatigues of embarkation, marching, and entrenching often under the most trying conditions as to weather and privations of food and rest. It is only by discipline cheerfully and without slacking that we can hope to win through with credit to ourselves.

Modern warfare between civilised nations imposes certain laws and obligations on the conduct of soldiers with regard to property and persons of noncombatants of the country in which they are fighting,   but unfortunately these laws are in many cases flagrantly disregarded. In many cases where this occurs it will be found that there is one cause — drink. Men under the influence of liquor   and inflamed by the excitement of fighting, or the contagious excitement which develops in crowds, do things which they would never dream of doing in their sober moments, or by themselves. Since the war began Russia has abolished vodka, and France has prohibited absinthe. The King of England has led the war in Temperance in Great Britain, and the United States of America have prohibited liquor in their navy. These things have not been done without good grounds, and I now appeal to the members of this battery to refrain from any indulgence during this campaign, which might lead them into doing things which would reflect discredit on themselves and on the battery. I prefer that this object should be achieved by putting men on their honour, rather than by threats of punishment. At the same time, it is   desirable that all ranks should know that offences committed on active service, when in contact or in the vicinity of the enemy, carry much severer punishment than offences committed at any other time. I am sure that it is the wish of everyone that when this battery returns to Australia, it will be with a record of which Australia in general, and Queensland in particular, will be proud."

Published in The Telegraph on the 17th May, 1915.
[Courtesy of National Library of Australia - Trove]