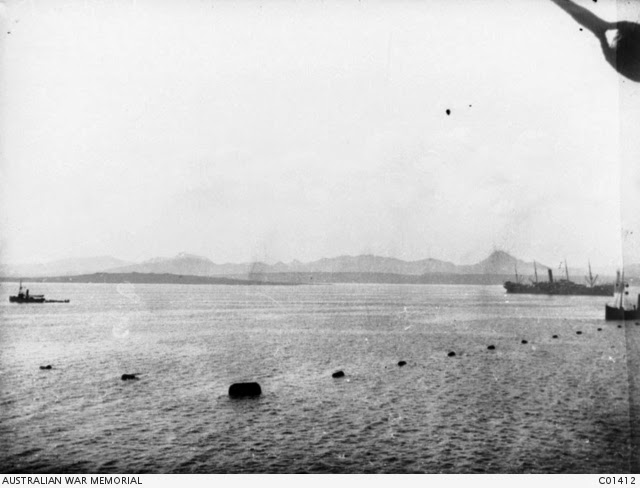 Passing through the submarine boom at the entrance of Mudros Bay, April 1915.
[Courtesy of Australian War Memorial - C01412]

Our ship was cutting out a great pace and last night averaged up to 8 knots. Sentries were posted all over the ship & a sharp lookout kept for submarines. Routine work was carried out all day and we passed several large rocky looking Islands which stood out boldly on the horizon against an azure sky with an equally blue sea for a foundation. Late in the afternoon we came in sight of Lemnos Island which we discovered was to be our concentration point before we landed with the other forces to operate in the forcing of the Dardanelles. A minesweeper approached as our ship was turned about & steamed off in another direction. After receiving certain orders we shaped our course to a certain channel & arrived off Lemnos where we anchored. In the distance inside the Inlet behind some rock protections a number of Cruisers & Transports were visible. It was a charming view to look upon - the green ridges sloping up from the waters edge and here & there could be seen white stone buildings. Far at the back the hills or mountains we may say rose in majestic glory. - I hoped that when we steamed in - which I am sure we wld do later - we would make the acquaintance of some of the splendid scenery surrounding the [illegible]. Lemnos is an Isld over which there was dispute between Greece & Turkey after the Balkan war. Italy I understand owned it once. G. Britain took possession. 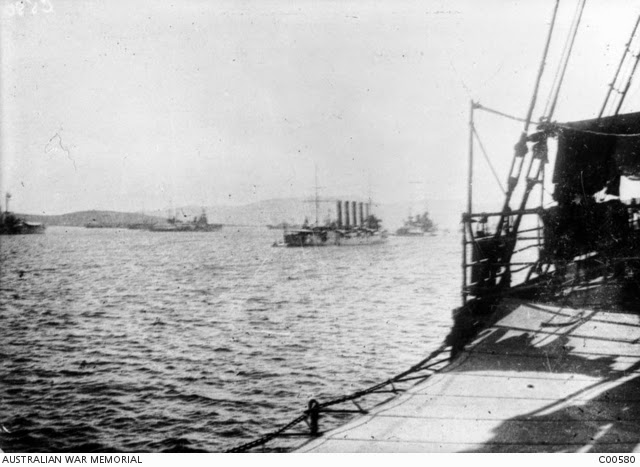 Passing the Russian man-o-war Askold (centre) on the way to anchoring in Mudros
Bay, taken from the deck of one of the Australian troopships, April 1915.
[Courtesy of Australian War Memorial - C00580]


Another very beautiful day. Temperature quite mild. We were told to expect cold weather. When I got up this morning we were abreast the island of Skyros. At 1 o’clock boat stations were sounded and checking of rolls proved everybody in their place

Inspected ship at 10.30 AM with Captain. Very satisfactory. Arrived off Mudros Bay at 4.30PM, entered at 5 PM with troops dressing ship.

Torpedo boats were guarding entrance to Bay. A boom is stretched right across the entrance, excepting a narrow way in for ships in the middle of boom. Many man o wars and Transports inside. As we anchored for the night just inside the boom we were unable to distinguish ships, excepting perhaps the 5 funnelled Russian Man O War "Askold".

We expect to move in early tomorrow morning, and I presume other Transports will also be coming from Alexandria. We are all sincerely hoping we shall not stay long here, but get off to our field of operations wherever it may be. B.A.C. completed storing of 18pr shells in wagons and Gd. Wagons. Small arm ammunition also issued to all ranks.