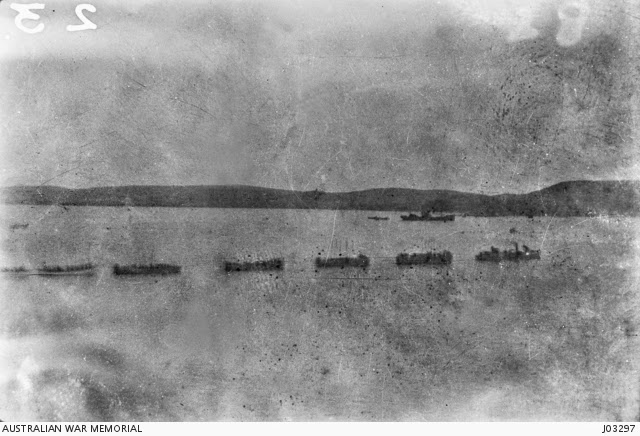 I was on Picquet duty last night and we had heavy rain and I had to shift my bunk from the hutch into the enclosed part of the stables. On the first parade of the morning a letter was read from General Burwood pointing out the great work before us and the privations we may have to undergo. A warning was given to conserve drinking water as much as possible when we landed. He pointed out our efforts would go down in history. The matter of water seems a very serious one as on board we are only allowed to have water to drink all washing and shaving water has to be salt. We all declare we will not shave I am already developing a beard.

During the day the clouds broke & it was delightful to look over the Harbour on to the landscape. The diaphaneous blue of the hills on the far horizon and the soft purple of the hills in between.

There is much that will haunt me in connection with my visit to and association with the historical relics of Egypt but where we are now has a haunting beauty of a different nature.

Landing parties working all day practising. At 2.30 PM I reported to the "Minnewaska", thence proceeded by launch to H.M.S. "Queen". Here were assembled the senior officers of the previous day’s excursion, with some others and Generals Birdwood and Bridges. The idea is to get in close to Gallipoli Peninsula and thoroughly examine the Coast line with a view to possible landing places.

The Admiral (Admiral Thursby) gave us during the afternoon an account of the navy operations up to date and outlined the proposed Combined action of Navy and Army. General Birdwood also spoke to us and informed us that the 29th Division, a French Division and the Royal naval Division were to cooperate with us. Details are confidential, but I think my memory will not fail me when the time comes to recount our movements. The undertaking is a colossal one, and is unique in the World’s History. We had all brought our blankets etc and made beds for ourselves in various odd places.

At daylight we were well into the Gulf of Saros, and steamed slowly down close to the shore, past Cape Suvla and down to Cape Helles. My previous opinion of the Coast and Country is confirmed, and I think the job we are called upon to tackle can be carried out successfully by our Australian troops.

After crossing the Entrance to the Dardanelles we steamed over to Tenedos. Here Major Villiers Stewart was landed. We saw the combined fleet at anchor, the little village with its tile roofs and the Venetian castle in the foreground. We steamed round the island, testing a special trailer shell for use against aircraft as we went along.

Returned to anchorage at Mudros at 4 PM. Altogether an exceedingly interesting trip.

Detailed Mr Vowles from the Brigade to report to Head Quarters at 9 AM today for duty as forward observing officer for Navy shooting.

Landing from Transports being practised all day.

I hope to secure charts of all this part of the world, so that on my return, I shall be in a better position to describe to others my movements. 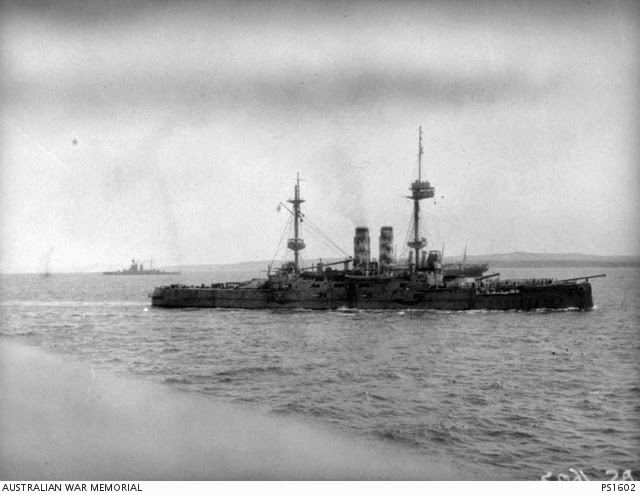 The HMS Queen, with HMS Queen Elizabeth in the background.
[Courtesy of Australian War Memorial - PS1602]