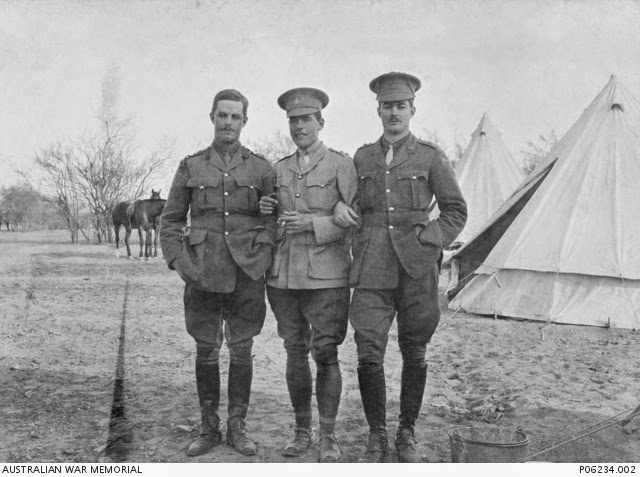 Group portrait of Lieutenant Cyril Albert Clowes (left), his brother Lieutenant Norman Clowes (right) and a British Officer identified only as Bowles (centre). The Clowes brothers had distinguished military careers that spanned the first half of the twentieth century. Cyril Albert Clowes was born in 1892 in Warwick, Queensland; Norman the following year. They were educated at Toowoomba Grammar School before entering the Royal Military College, Duntroon in 1911. Cyril was posted to the 1st Field Artillery Brigade & Norman to the 3rd Field Artillery Brigade. Cyril landed on Gallipoli on 25 April 1915 and served as a forward observation officer directing naval gunfire against Turkish positions. Norman Clowes landed at Gallipoli at the same time as his brother, and was wounded on the 5th May with a gun shot wound to the chest. Following hospitalisation in England, he rejoined his unit at Gallipoli, andsubsequently saw service in France and Belgium.
[Courtesy of Australian War Memorial - P06234.002]

At 11 last night I was sent for by Colonel Hobbs, and found we were at last under orders to embark for – somewhere.

All Brigade Commanders (or Staff) discussed details. This morning details were published of number of transports, O.Cs and troops. I have No 11 Transport (the "Cardiganshire") Lieut Clowes posted to 8th Battery. Lieut Richards from D.A.C. appointed as my Orderly Officer. I am quite satisfied with his appointment. He is a capable Officer. Arranging details re embarkation.