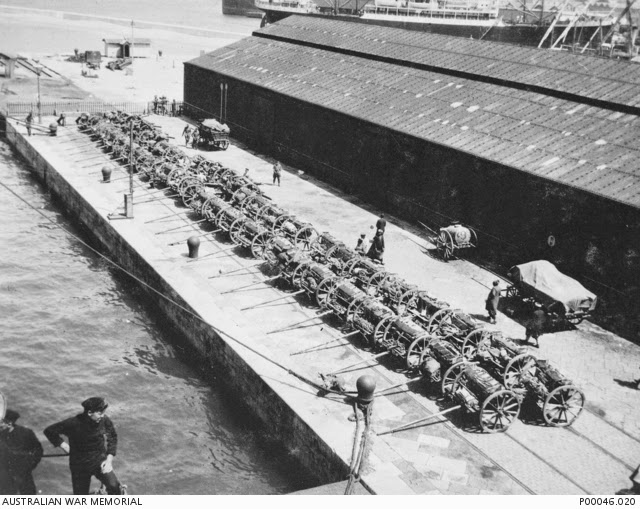 Limbers of the 1st & 9th Batteries of the 3rd Field Artillery Brigade, lined up
on the wharf at Alexandria awaiting loading - photographed from the deck
of the S.S. Atlantian on the 6th April 1915.
[Courtesy of Australian War Memorial - P00046.020]

Tuesday Our first work was to unload horses - baggage - Had charge of party on wharf. You can imagine it was a relief to once again drink in of the cool fresh breeze laden with ozonne. The harbour was full of transport craft. Went below on the Cardiganshire to have a little breakfast. It was lovely to get a snack sandwich free from the grit and sand of the desert.  One of our humourists who happened to be one of the advance guards arrived at the ship the evening before us and a good meal of steak green peas was placed before him. He rather upset the Purser on the ship by putting it aside and saying I cant eat this. On asking the reason the Purser was greeted with the reply "Why there's no sand in it."

All day loading up horses and harness &c Baggage was to be put on the train again - sent to our Base. - We had only such articles as we could put in our pockets and our small haversack and what we stood up in.  Old soldiers can tell how things left at the Base fare - they're are generally missing and you're lucky if you ever get them again but some things were a little more straightened and I found I was in charge of piquet. It was a trying evening as one horse was very sick and had to be watched and I had little or no sleep the previous night on the train.


Arrived at Alexandria at 5.30AM, with first train. Major Hughes came next with his Battery about 2 hours later, then Capt Waite with his column. Boat was late drawing alongside so work of embarkation was not finished by nightfall. We are to continue again at 6AM tomorrow. Went into the town during the afternoon and forwarded £60 to John Halford to cover Charley’s a/c to June 30th. Alexandria full of French and British troops. The former look to us very strange in their red breeches and blue coats, and also in the new grey uniform. Their rifles are much longer than ours, also the bayonets. Alexandria is full also of transports. About 70 in all. We are beginning to feel a warlike atmosphere surrounding us and getting into our bones. Very interesting buildings in Alexandria. One has to drive largely through native quarter before reaching the town proper. Street buildings are very quaint, mostly wooden framing with brick and stone filling, upper storeys generally cantilevered over lower ones. There are some fine buildings in the town proper.
[Courtesy of State Library of New South Wales - Sir Charles Rosenthal diary]