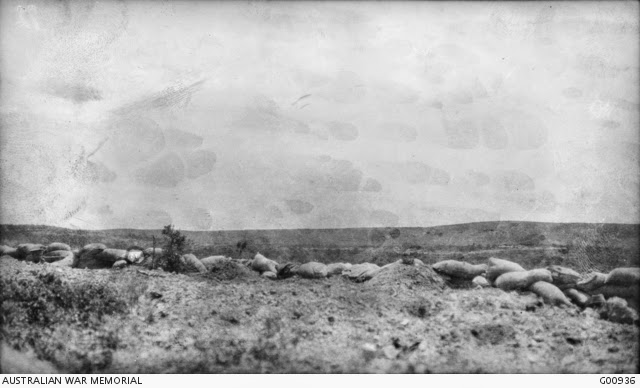 Just behind the Australian Infantry firing line, within which the 7th Battery guns
were firing - across in the distance, just below the ridgeline, one of the Turkish
trenches is visible.
[Courtesy of Australian War Memorial - G00936]

After 3 days in our gun pit you can imagine the state of our apparel & person. Dirty - torn - tired etc. I lost all my blankets mess tin & kit. Everything was left down at the foot of the ridge things were taken by anyone who required them. In the mad rush that our Infantry made on the first day they dropped their kits as they went after the Turks & today several parties went out in front of our firing line & secured a number of several Turkish ones. On inspection we found that they were well equipped & did not suggest that Turkey was in any way badly off need financially. Through our glasses we could see several dead men about 200 yds in front. No one can imagine the horrors of war until they have experienced it. Today was easier for us as our firing seemed to have had good effect. The Cruisers which were helping us from the harbour put in splendid work in firing over us right on to the enemys ridge beyond. The enemys trenches were just from 500 yds to 900 yds from us but at times they moved up to 200 yds in gullys & from there continually sniping at our men with disastrous effects. The Infantry were very pleased with the work we were  doing & praised our 7th Battery in flattering terms. This afternoon we put our sentrys out so that we could get a little sleep & retire on to the beach for a wash - a luxury just now as my face had not tasted water for over 3 days. On going to the beach Bullets were flying all around me & it is remarckable how calous one gets after a few days familiarity with warfare.

The swim was very refreshing notwithstanding the bullets fell around. One man was shot while washing at the waters edge in the morning after washing I went along to the quarters where our 9th were quartered & talked to Olly G & Lieut Charlie F. I was told about half of their men were wounded or killed. Both Webbs were wounded & Vic Saunders reported as missing.

Where we landed is called Kaba Tepe.

The night 28/29th was cold + raining there was some firing along our front + we shelled a place where the 4th Infantry reported the enemy were massing.  At daylight we saw enemy re-entering trenches out of which we had driven them on the previous day we put some fire in + later the Navy shelled the whole ridge 400.

During the afternoon things were quieter on our right front although firing on our centre + left was still heavy.


Fairly steady day. "Bacchante" shelled trenches on contour 400 and did excellent shooting. Enemy preparing trenches against Left flank. Heavy cannonade of enemy’s artillery about 5.30 PM. The navy at once responded. Enemy’s battery of six field guns (about 14 ½ pr) seems to be getting plenty of shrapnel. As yet we have been unable to locate it. Adjutant taken to assist General Cunliffe Owen.

Col Hobbs and Col Christian came up this afternoon to our position. As the Turks came along Contour 400 in good number, we were able to give them an afternoon’s experience of unique character. Col Christian had a few shots with a rifle and affirms he laid out a couple of Turks. All our people very exhausted. I have had no sleep since landing. Have arranged for portion of 8th and 9th Battery personnel to take a few days on 7th Battery guns, partly to relieve the 7th personnel and partly to give them experience.