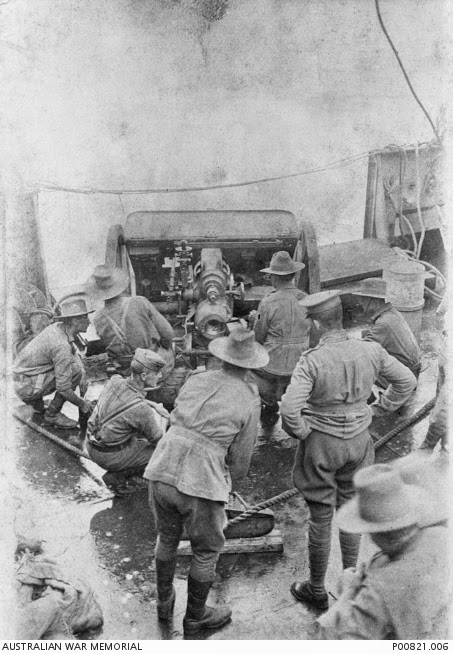 Onboard the A18 Cardiganshire off Lemnos Island on the 24th April 1915,
the 7th Battery maneuver one of their 18 pound field guns into position at
3:30pm, ready for the landing at Gallipoli - Officer standing just right of
centre with hands on hips, is likely (based on photos of the Battery)
Lieutenant Percy John Ross.
[Courtesy of Australian War Memorial - P00821.006]

We did not leave as anticipated but all day transports passed out guarded by Cruisers & Torpedoes. The Queen Elizabeth went out in all her splendour & was followed by a long train of Cruisers &c It was indeed a majestic sight. In the afternoon Col Rothental informed us we were to land next morning in conjunction with the 3rd Inf Brigade & [illegible]. Turned in early as we would have to shift early

At Anchor in Outer Harbour. Early in the morning Transports and Men O’ war commenced to move out from Mudros Bay. The most impressive sight was between two and three o’clock. At 2PM the "Queen Elizabeth" steamed out flying the Flag of Vice Admiral De Roebeck. Then followed the "Queen" flying the flag of Rear Admiral Thursby, who is in charge of the Fleet actually assisting our Army Corps, then five other ships including the "Triumph", "Majestic" and "Bacchante", who are all covering our landing. Then following came seven Destroyers, 3 of the Beagle Class, and 4 of older pattern. They made a very fine show. Two Hospital Ships came in today making 5 in all of a total capacity of 2500 beds. Evidently serious casualties are expected.

At 4.30 this afternoon I addressed all troops on board and wished them well in the ensuing operations. After dinner tonight a church service was conducted by a leading Seaman of the Navy (who is on board with some details for handling Horse and Gun boats) and Corporal Hare.

Corporal Hare in particular gave a very fine address. It did one good to hear the men singing "Nearer my God to Thee", "Stand up, Stand up for Jesus", "God be with you till we meet again", "God Save the King" and "Auld Lang Syne". The air tonight seems electrical. Everybody is in splendid spirit and ready for tomorrow’s momentous happenings.

We leave here during the night and by daylight should be off the Gallipoli coast, and, we hope, watching the landing of our Second Brigade Infantry, the First (3rd) Brigade being landed by daylight.

We shall all endeavour to get a good night’s rest. Goodness knows when we will get our next, perhaps it May be a very long night for some of us. We can only do our best, and I am sure everybody will do that. I wonder whether there will be any further entries in this Diary. 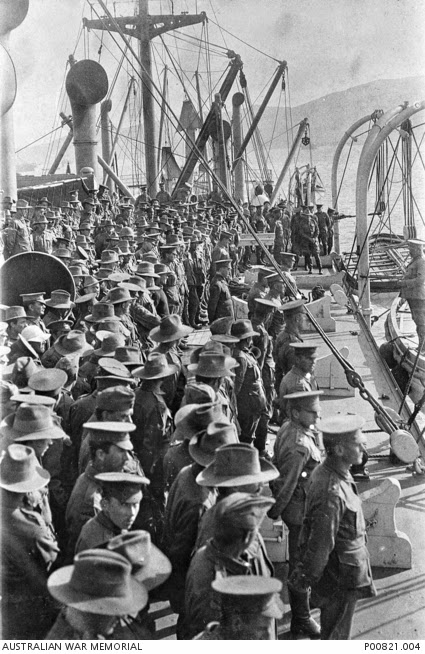 Col. Rosenthal (extreme right on lifeboat), addressing the men of the
3rd Field Artillery Brigade on their departure for the Gallipoli peninsula,
& the war front, on the afternoon of the 24th April 1915.
[Courtesy of Australian War Memorial - P00821.004]