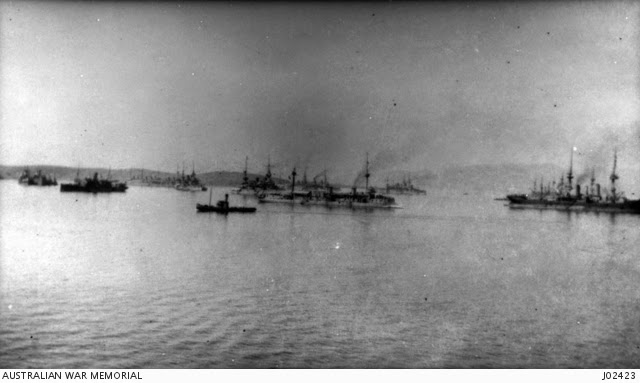 I rose early and just as dawn broke 5 other transports appeared on the horizon and approached us guided by several Torpedo Boats. We entered the harbour about 8 PM. It was a fine space of water and made a fine protection. Inside I counted about 60 steamers including about 12 Cruisers some of which were French. I suppose such a gathering of craft had never been seen there before. Several of the Cruisers showed evidence of recent encounters with the forts in the Dardanelles. In the undulating ridges of the country ashore could be seen fine patches of green vegetation but no sign of tree life in the distance.


I hardly realise it is Sunday. One loses count of the days. Two Transports came in past us early this morning and we then moved in. We passed several Man O’ War, the leading one being the "Queen Elizabeth", and anchored inside the bay among a large number of Transports, more coming in during the day. Country around looks very pretty. Fairly high hills, nicely grassed but very few trees, and these only about the size of fruit trees. The town of Mudros itself is hidden from our view as we lie at anchor.

Among the warships in the Harbour are the "Queen Elizabeth", "Cornwallis", Lord Nelson", ‘Queen", beside other British ships the names of which we could not discern. One cruiser undergoing repairs seemed to have had a gruelling. A number of French ships, whose names I could not ascertain, were also at anchor, together with the Russian cruiser "Askold" which we first saw in Colombo and again at Port Said. Besides these there are torpedo boats, Destroyers (I think the "River class) submarines and Repair ships as well as parent Hydroplane Ship, the "Royal Ark". This afternoon a big Hydroplane has been circling around and above us. The sight here is very similar to what we saw at Albany, with the added interest of the Men O Fight and Hydroplanes etc. We sent off a big mail today, probably our last for some time. It is no joke censoring a ships mail of 500 odd men, and I shall want to curtail correspondence somewhat. Balance of our Eastern mail was delivered to us this afternoon. Nothing for me. At 4 O’clock a staff officer came off from Gen Hamilton’s flagship the "Arcadian" and invited me to go for a trip tomorrow on the "Queen Elizabeth" to the proposed place of landing at Gallipoli peninsula. All Brigade Commanders and higher are invited. A launch is to pick us up early in the morning and the "Queen Elizabeth" goes out at 8.30, returning about the same hour at night. As the journey is about 50 miles we anticipate we shall have about four hours there. The opportunity to examine this latest engine of war I much appreciate.