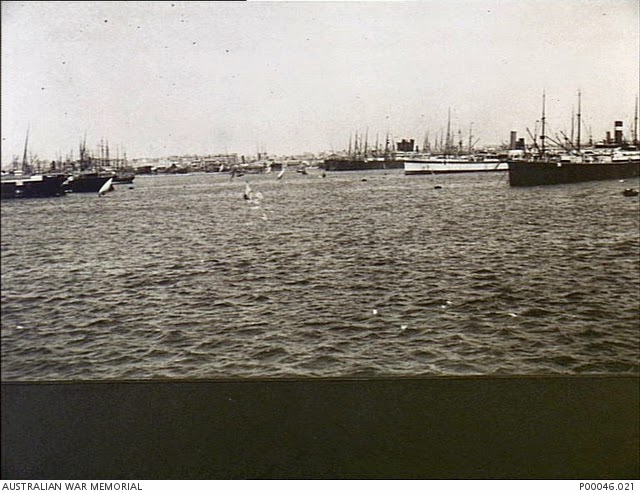 Transport ships berthed in the harbour at Alexandria just prior to the departure of troops,
including members of the 3rd Field Artillery Brigade on HMT A18 Cardiganshire - taken
8th April 1915.
[Courtesy of Australian War Memorial - P00046.021]

We did not move out as anticipated - our first duty was feeding up in stables.  Our 7th was in a fair position out with part of the Amm Column horses.

It was so refreshing early in the morn - so differant from the sandy surroundings we had to suffer for the past few months. An incident reflecting on American sympathy with Germany occurred at our wharf. An American craft was berthed below us - several of the crew who were on the wharf gave 3 cheers for the Kaiser as a number of our chaps went up the wharf. It did not take long for the lads to resent the cheer & a rush was made for the Americans who were thrown unceremoniously into the harbour. This rather quenched their enthusiasm for the Kaiser as you can imagine.  In the afternoon we loaded up ammunition from a lighter which came alongside and later on all gunners had to go below in the hold to fix the fuses on to the shells.  While engaged there we heard that rattle of the anchor and the [illegible] of the engine soon followed and it conveyed to us the welcome news that we were off.  I could not tell you how glad I felt.  The trumpet sounded then general fall in and we rushed up the ladder to find the lovely cool breeze as our ship steamed out - no sand a total absence of that hot wind - one seemed as if in paradise to once again drink in the ozone of the glorious ocean. We were immediately told off to different boat stations in case of accidents &c and we learned that the Officer in charge was our Bomb Colonel of whom we [illegible] There was not much sea on but the Cardiganshire just dipped her nose gently as she rode each wave.

Oh to be away from the wailing lilt of the Egyptian & arab.  of course we did not know our destination but divined it would be the Dardinelles.  The Cardiganshire is a fine steamer of the Royal Mail Line about 10000 tons and the mess rooms allotted to us are well laid out and the menu good. oh that absence of sand.

On board we have the 3rd Battery the Amm Column Our 7th Battery Headquarters The Army Medical men & Army Service men & a few Infantry attached to our Battery.

Got balance of 18pr Ammunition aboard (24242 rounds for BAC.) The 3rd Battery completed fuzing of shells for complete battery, and the 7th Battery commenced theirs.

Obtained two horses to replace the dead. Ordered off suddenly leaving Capt Marks and Lt Urquhart on shore. Actually moved off from Quay at 3.45 PM. As soon as we were outside I opened confidential packet which proved to be Handbook of the Turkish Army. Maps proved to be of Gallipoli. We had previously imagined we were to disembark on this peninsula and it now looks as if our ideas were correct. Several ships moved out before us, and the orders for all ships are to rendezvous at Mudros Bay on South Side of Lemnos Island. A second horse belonging to BAC, died this morning. 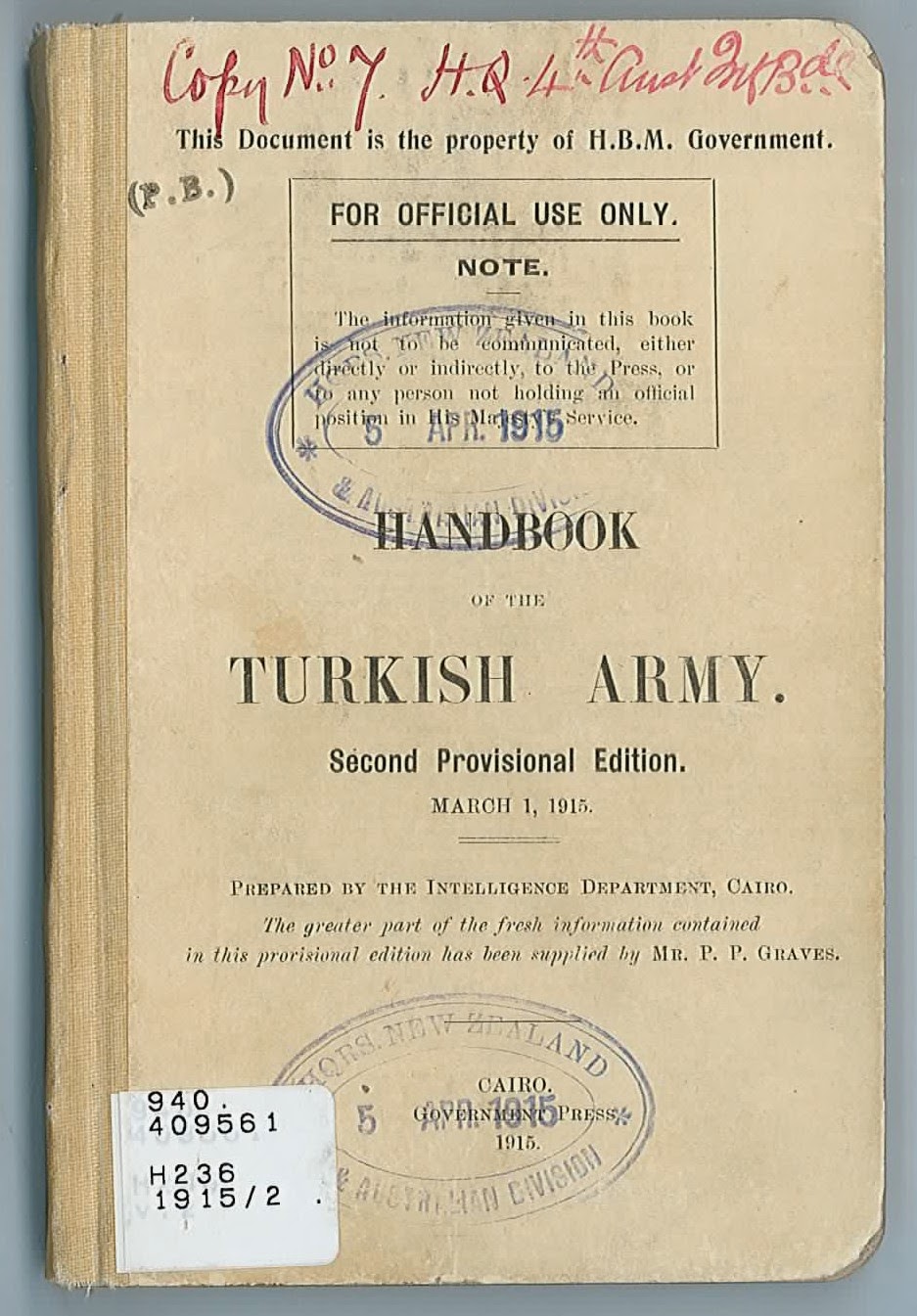