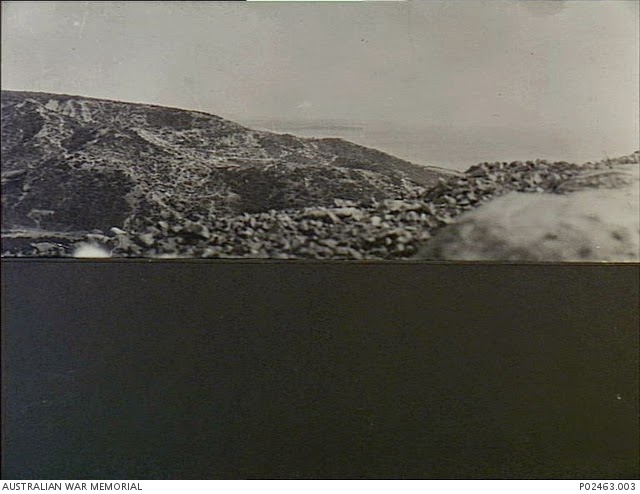 Looking south towards Gaba Tepe, with 400 Plateau on the left - this is probably
taken from high above Anzac Cove at Plugge's Plateau, near where the 7th Battery's
guns were positioned.
[Courtesy of Australian War Memorial - P02463.003]

This was a day in hell. We started firing on to the enemy's trenches on a far ridge about 4 am & at the morning I had the pleasure if one could call it that of blowing up Turks. I could see the unfortunates dropping after the bursting of the shells. We did splendid work & the Infantry were greatly cheered. The sad features of war presented themselves very forcibly to me today. A poor Infantry man came up behind our gun & asked for the Colonel & I directed him & he stepped forward & immediately dropped with a bullet wound in the head & lay moaning & bleeding profusely. Later on our Sergeant was shot while standing at our gun. Bullets pouring all over us. All the ground in front of us was covered with accoutrements & dead men here & there. The sun went down on the scene of carnage in its usual smiling way. We were up all night peppering away & as one longed for the night so we longed for the morn to break. In watching across the battle field in the early morning hours you get a fit of nerves & every minute you feel the enemy is going to charge.

During the night 26/27th we continued to dig in guns + prepare pits for 4th gun which was got into position at daylight.  Only casualty Bombr Eagle bullet wound in leg.  The Battery was being fought each gun independently an officer being in command of each gun.  Capt Leslie commanded No 1 gun which had an arc of fire from KAPA TEPE round to ridge in front about 70°.  No 2 gun under Lt PJ Ross from KAPA TEPE round to edge of ridge Contour 400.  No 3 gun under my command.  No 4 under Lt J Urquhart kept ridge 400 under fire + the ground in their immediate front.

At 4-30am we started shelling enemy on ridges + gullies south of ridge 400 where large numbers of infantry were moving + continued during the day whenever they appeared.  The warships + transports were shelled from the Dardanelles, one transports appeared to be struck but she steamed out towards IMBROS IS.  Our beach was also shelled by the enemy’s field guns causing several casualties.  Our Batteries were also shelled by Batteries from the direction of OLIVE GROVE but suffered no loss.  Casualties – Sergt Braithwaite + Capt Bliss bullet wounds.  During the night the enemy again attacked but were repulsed.  We assisted with shell fire from our guns. 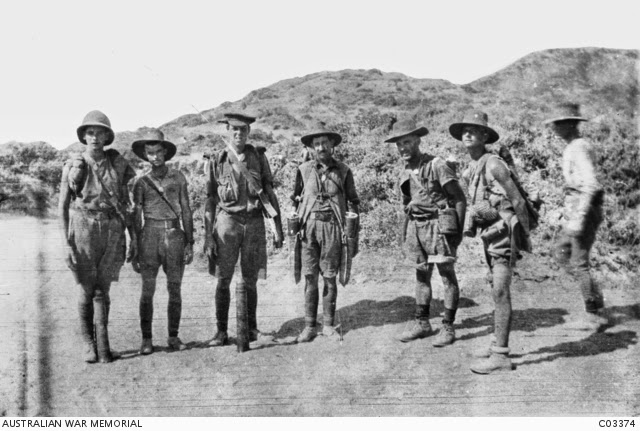 A group of unidentified Australian soldiers carrying 18 pounder ammunition
up to the guns in pouches suspended on their backs and shoulders.
[Courtesy of Australian War Memorial - C03374]

I have assisted Major Hughes throughout the night with his different guns as well as yesterday and nobody has had any sleep. At 3.30 AM while I was controlling one of the guns we received word that the enemy were massing in a piece of scrub land about 5 acres in extent. I immediately opened fire and thoroughly searched this area using in all 36 rounds of shrapnel. We heard yells and cries of "Allah" and we know we got into a nest of Turks preparing for a morning attack. These rounds drew fire from the Dardanelles, in the vicinity of Fort 32, but whether from forts or ships we could not ascertain. Twelve rounds were fired, apparently 6" or 8". Six rounds fell among the Transports but no damage was done. We have had a fairly quiet day, both sides digging hard. We engaged Infantry several times successfully. Fairly quiet night. Both Infantry in the trenches and gunners ready for any attack. Turks attacked twice but were repulsed. We used shrapnel effectively, sometimes at Zero. Plenty of dead Turks lying in the Field immediately to our left front, some being no more than 25 yards from our Infantry line. I am informed that among our killed are Colonel MacLaurin and his Brigade major, Major Irvine, also Col Clarke and Col Onslow Thompson. The fleet again bombarded. Our Brigade Ammunition Column has been and is doing excellent work in supplying ammunition by hand to the guns. They have about half a mile to carry it, and in that half mile rise 400 feet, and at the same time have to cross a bullet swept area.