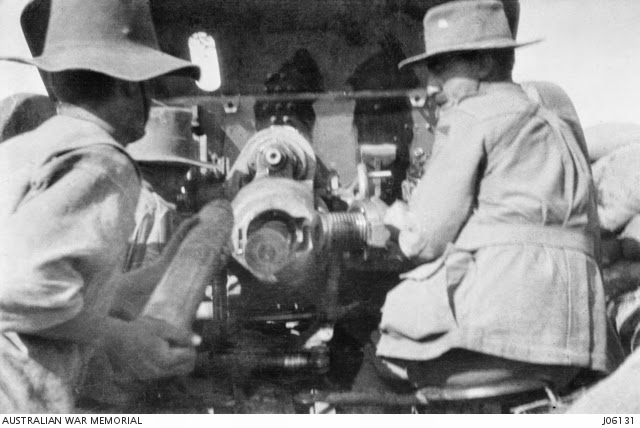 One of the 7th Battery's field guns in action, in the first days after landing - a spent
shell casing can be seen ejecting from the gun's breech, whilst the No. 4 of the crew
prepares a fresh shell for loading.
[Courtesy of Australian War Memorial - J06131]

Another day of carnage - shells - bullets & every possible instrument of death everywhere. We shelled the enemy's trenches all day with good effect. In the evening an attack was expected but it did not eventuate. I'm afraid a lot of our men fire at shadows in the evening. It was a bitterly cold night.

At daybreak enemy were again in force on ridge 400.  Rifle fire from the enemy was continuous.  We were also sniped at from within our lines by enemy concealed in scrub on sides of ridges.  We were assisted by shell fire from the Bacchante.  During the first 3 days the Battery fired about 2000 rounds.  Owing to the continuous firing + digging in a correct record could not be obtained for each gun.

The Turks were discovered getting a gun into position on South of Cape NEBRUNESSI which would have taken our position in enfilade + in reverse.  The Navy shelled the position which they were preparing.


Searched gullies again just at dawn and got a good few Turks. Steady shelling all day. Repeating previous days’ work. Twice during the night shelled massing Infantry. We have fired about 1800 rounds to date. In view of our peculiar position, having 187° of open country to watch, I have an officer fighting each gun singly, so that fire can be directed on any point at a second’s notice.

This is giving splendid experience to No 1 and section Commanders.