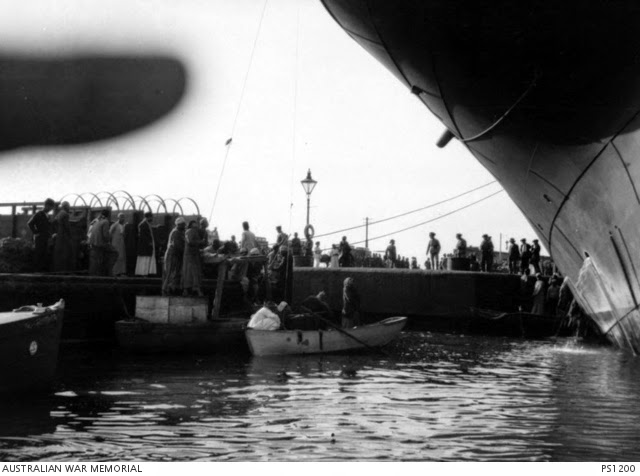 A busy scene on the Alexandria wharf...complete with stray finger in shot.
[Courtesy of Australian War Memorial - PS1200]

Feeding up & loading was continued and in the afternoon "mail" was distributed letters from home - how sweet. A muster roll at 4.30 to see everyone was on board.  After tea I had a shower & felt refreshed.  The coal dust is a dreadful nuisance at the wharf where we were berthed. I picked out a spot on deck to roll myself up in a blanket - I retired - that sounds a bit civilized - early.


Loading resumed and completed. Went into Alexandria and posted keys of boxes to Nell, also letter to her.

Got a pair of warm slippers at Davies Bryan also some socks.

Capt Waite lost a horse from Colic. Major King also lost one in Cairo before entraining, through a similar cause. I shall try to replace them from remounts here. No leave allowed officers or men.