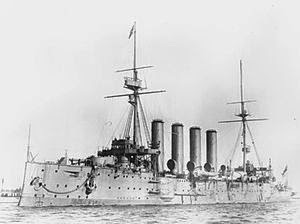 The Cressy-class armoured cruiser H.M.S. Bacchante, from which Col. Rosenthal
received crew for working the horse boats aboard the A18 Cardiganshire.
[Courtesy of Wikipedia]

The excitement of the anticipated leaving is to hear/bear especially as we are being put off from day to day. Our departure is again postponed till tomorrow. Oh the packing &c


Still lying at anchor. One of our Transports stuck on the mud in the Bay, and so far they have been unable to pull her off. Chief Engineer and Third Officer today took photographs of officers grouped on Bridge deck. They have turned out very well. Received letter from Chris. Replied at once to him and enclosed photo of self and two officers in Goat Skin Coats, also picture of "Queen Elizabeth". Capt Jopp and orderly reported to "Minnewaska" at 12 noon for duty with Colonel Hobbs as Forward Observing Officers. Party of A.B. Seaman, Petty Officer and Chief Gunner reported to me today from H.M.S. Bacchante for working of Horse boats. Detailed information from Lord Kitchener to Gen Sir Ian Hamilton re victory in Mesopotamia. Turks fought bravely and had to be turned out of their positions at the point of the Bayonet.

Quite a large Australian mail arrived today, everybody delighted. Captain has just given permission for 1st and 2nd Officers of this ship with crews to work launches when towing horse and gun boats ashore. We want to "bag" them to work our ship if possible, for we want to work against time and land onur Batteries first. We want, or rather, I want to ensure one of my batteries firing the first shot from Field Artillery. Troop ship just entered the Harbour and passed us, carrying troops wearing a red Tarbouch. They look very much like Egyptian troops.