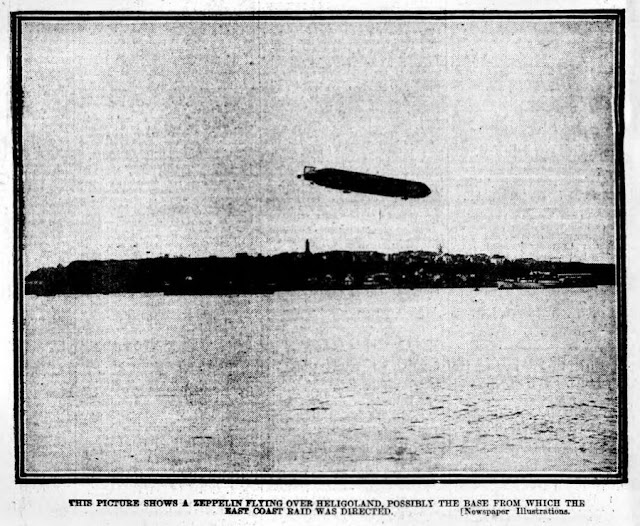 "THIS PICTURE SHOWS A ZEPPELIN FLYING OVER HELIGOLAND,
POSSIBLY THE BASE FROM WHICH THE EAST COAST RAID WAS
DIRECTED" - The above was published in the British Western Mail on the
21st January 1915, in response to a German Airship attack on the Norfolk
Coast.  German Zeppelins were a constant security threat in the lead-up to
the Gallipoli Campaign (below).
[Courtesy of The British Newspaper Archive]

We had to have all lights out on a/c of some rumour that a german airship had made its appearance during the day and was observed by one of the hydroplanes attached to our Cruisers. It is lovely weather just now - crisp - cool - very refreshing.

12 April - To-day all our ships boats were lowered and crewed by our lads. It was practice & exercise at the same time. We ascertained that the Queen Elizabeth who we heard had done such great work at the Dardanelles was in the harbour and had only taken a little part the operations against the Forts. We were told that as no Infantry had occupied the Forts which had been shelled the Turks had again taken possession. Part of our work when landed will be to hang on to these captured Forts. A party of O.C. left today in the Queen Elizabeth to see the effect of some shelling. This harbour of Mudros is only about 50 miles from where we are supposed to land.

Our Boys came back [illegible] full of the cleanliness of the villages ashore. 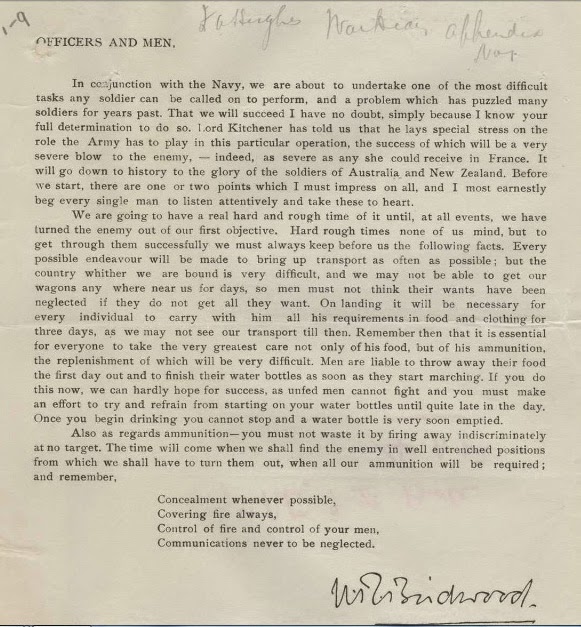 
Today is probably the commencement of most unique and interesting experience for me. About 7AM a pinnace from the "Queen Elizabeth" took us off with other officers, and about 8.30 she moved away from her mooring. Gen Sir Ian Hamilton was aboard together with three other Generals of his Staff whom as yet I do not know, our three Infantry Brigadiers with their staffs and sundry other O.C.s. I was the only Artillery officer present, Col Hobbs, Christian and Johnstone not having yet arrived in Port. The first impression my mind and vision received of this monster Battleship was one of awe. A description of her as far as I am able I will note later.

Just after leaving "prayers" were said in which we all joined, and it appears a nice feature of naval life that the sailor who does not know whether today shall be his last or not, has at all events opportunity given him to place himself under the care of the Almighty. After service all the men ran round and round the deck at a smart double to the accompaniment of bright lively tunes from the Ships band. This continued for 5 minutes, and on a blast from a bugle the whole crowd halted and instantly commenced doubling in the opposite direction as if to unwind their previous movement. At the end of the second 5 minutes the same procedure took place again, giving in all 15 minutes smart doubling, the middies accompanying the men. There followed a few minutes physical exercise prior to dismissal to their various duties.

They look a fine hefty lot of men.

We had not proceeded very far before speed was increased and soon we were dashing through the water at 25 knots. The ship was like a rock, no movement, but the wash astern was tremendous. One sea came on the after deck and gave some of our officers as well as naval officers a wetting.

We have passed two French submarines the "Le Voisier" and "Coulumb", both very queer looking craft. In passing I may mention I was today told that our A.E.2 is due here from Malta in a day or two and is to do duty here. As we neared the Dardanelles we saw three rather fine looking battleships, and when passing about 500 yd from them I enquired their names. I was informed they were merchant service ships, rigged as dummies; funnels, guns, wireless gear, fighting tops etc. They are evidently serving a very useful purpose in "bluffing" the Turks.

When we came off the entrance to the Dardanelles course was set up the West Coast of the Gallipoli peninsula at a distance of probably six or seven thousand yards from the shore. Just about this time a Destroyer of the "Beagle" class (a later class from Australian "River" type) joined us and convoyed us round till the time for leaving in the afternoon.

As we were coming up to the entrance we could see on our left at some distance the fleet of Men O’ War standing by, and actually at the entrance three Men O’ War and a Destroyer. Two of the Men O’ War were "proping off" in the direction of Troy, searching for Field Howitzers and incidentally practising communication by wireless from Aircraft working in conjunction with them and "spotting" their shooting for them. We could see the flashes of discharge at the ships side, and bursts of shell on main land.

The third Man O’ War was the "Swiftsure" and the Admiral of the "Queen Elizabeth" (Vice Admiral de Roebeck) told me she would be shooting later in the day. We followed up the Coast as far as "Suvla Bay" and "Cape Suvla", then turned and came back, but this time much nearer the coast, being I estimated between three and four thousand yards off shore. We were asked not to show ourselves but to remain under cover, which we did. On the run back along this coast the engines were reversed (to test some work recently completed) and for a little time we travelled stern first. At this juncture 4 shots were fired at us presumably from 6" guns ashore. The shells hit the water with a big splash some hundreds of yards in front of us. I made rough sketches of the Country in outline as seen from the ship, and there appeared to me to be quite a number of suitable landing places, but "Suvla Bay" appears to be the best spot, and from my observations of today I hope the Artillery will be directed to this Bay. The Country looks very well. Green sward intermingled with scrub, and altogether it looks quite good country to work in. The High land in vicinity of Trig Station 706 at narrowest part of Peninsula is apparently strongly held, any number of trenches being visible. They may be dummies, but at all events they are sited on a very commanding height.

We crossed the entrance to Dardanelles from North to South, then steamed for some distance along the coast on the Asia Minor side. Here again I made some more outline sketches. The large village of "Yeni Shehr" had been heavily bombarded and certainly showed the result in the ruined condition of its buildings.

Passing further south we saw a big group of Man o’ War. (I should say about 50 of all classes and nationalities) at anchor under the lee of Tenedos island. Then we headed for home and reached the moorings in Mudros Bay at 6PM.

The officers on the ship were particularly kind to us, and went to no end of trouble to explain everything possible. We all had an opportunity of examining the mechanism of the wonderful 15" guns and saw them loaded. The whole process only takes about a minute. We saw the record of rounds fired by one forward 15". The Gun Layer had marked in pencil on the inside of the Turrett "Angry Rounds"

I do not know how many rounds the others fired. Shrapnel for 15" is carried on board. One can hardly imagine the scatter of bullets from one round if nicely burst in air. The eight 15" guns constitute the main armament, and in addition there are a number of 6" and Anti Submarine and Aircraft guns. Eight torpedoes are carried aft with two tubes, and I understand the same forward.

Ship is driven by turbines, with oil fuel. Engine and boiler rooms spotlessly clean. The "Queen Elizabeth" has in all been hit 15 times, chiefly with Field Howitzers, doing practically no damage except to wooden decking. One shell about 2/3 the size of our 18pr entered the side of Ward room, then burst, the bullets scoring the top of the heavy Cedar tables and spattered in inside partition, the case going through. In making its entry the shell cut a piece out of the ship’s side, about 10" long and about 6" wide. These trophies have been mounted. The shell on a board, the fragments of ships side as a gong, and the gunmetal fuze from the shell fitted to an ebony handle and used as a striker for the gong. Luckily no one was present in the Ward room when the visitor called. Altogether the day was most interesting and instructive.

When I finished dinner I reported to Col Hobbs (who had arrived in Port during the day) and was informed I am to go up again tomorrow in the "Queen", also a fine Man o’ War, and I am given to understand that I shall in all probability have the honour of directing the first Field Artillery to commence Land operations.

On Colonel Hobbs ship I met a brother of Major Macksworth. He also is a major and belongs to the Flying Corps. He is to assist the navy by "Spotting". 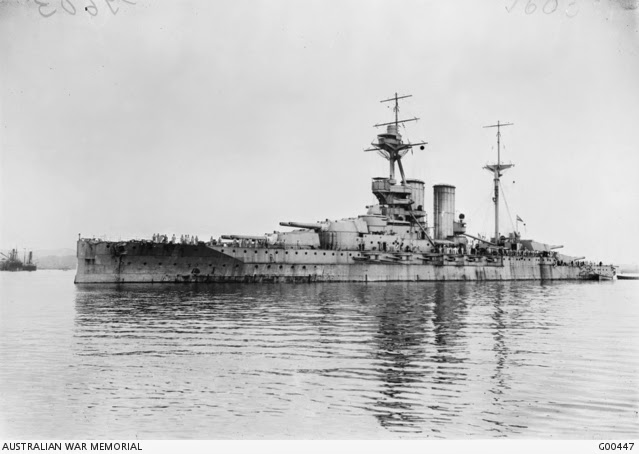