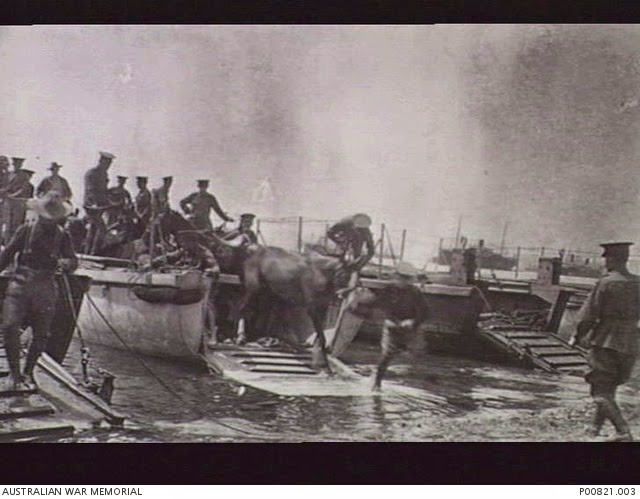 Horses being unloaded from pontoon boats, very possibly those of the 3rd Field Artillery.
[Courtesy of Australian War Memorial - P00821.003]

Last night when just going to bed I was called by a chum - Corp Tinton and invited to join him in a supper of boiled Fowl & a bottle of Porter. I was not slow in accepting & we sat out in the moonlight & talked over the incidents of our lives for hours on deck. It was delightful I always thought that in the Southern Hemisphere that the infinite beauty of a moonlight night only existed there but I find it even goes to much higher latitudes. One cannot criticise the authorities too severely in not publishing a bulletin of news of the war. We are completely in the dark as to any authentic news. A little water - fresh was dolled out today to wash our clothes. We were supposed to be washing them in salt - I say supposed. Horses were taken ashore today & guns shifted from one hold to another.